Product of an awesome partnership between Conserving Carolina and private landowners, the Trombatore Trail climbs from Bearwallow Gap to the lovely high meadows of Blue Ridge Pastures along the Eastern Continental Divide. The views of Hickory Nut Gorge from this grassy mountaintop are fantastic, well worth the 1,000-plus feet of elevation gain.

The land trust Conserving Carolina partnered with private landowners to establish the Trombatore Trail, which leads up from Bearwallow Gap to Blue Ridge Pastures. That meadowland bald, which rises to 3,780 feet along the Eastern Continental Divide, is itself private land protected by a conservation easement through the Southern Appalachian Highlands Conservancy.

The Trombatore Trail to Blue Ridge Pastures is a 4.8-mile round-trip endeavor involving some 1,200 feet of elevation gain, so be prepared to break a sweat.

The route begins at Bearwallow Mountain Road right across from the trailhead for the Bearwallow Mountain Trail. It initially twists its way through the richly forested headwater ravines of Brush Creek. Just past a half-mile in, look down and to the right of the trail for a huge, heavily burled buckeye tree reckoned at north of 150 years old. Its knobby configuration likely saved it from being felled during early logging days, and now it stands as the heftiest tree in the vicinity: a time-tested veteran.

After its Brush Creek wiggles, the Trombatore Trail heads north along the flanks of a ridge spur. At 1.1 miles, it joins a road on its uphill journey, turning single-track again at 1.8 miles. This stretch passes some road junctions, but stick to the designated trail: Remember, this is all private land generously opened along this route only to hikers. The trail’s well marked the full way, so no excuses.

At 2.4 miles you’ll hit the grassy heights of Blue Ridge Pastures, hanging a left to reach the summit. The rolling meadows of this bald provide an unforgettable platform for soaking up the broad scenery, including a top-down prospect of Hickory Nut Gorge and such bounding peaks as 4,232-foot Bearwallow Mountain and 4,412-foot Little Pisgah. On clear days, the Black Mountains—including 6,684-foot Mount Mitchell, the highest peak in the Southern Appalachians and indeed in the entire eastern USA—can be picked out to the north.

This is a postcard-perfect spot for a picnic, which’ll let you bask in the Blue Ridge Pastures viewshed as long as possible. Keep in mind that no camping and no campfires are allowed here.

Conserving Carolina and the Southern Appalachian Highlands Conservancy hope to extend the Trombatore Trail to Hickory Nut Gap (the next pass north from Bearwallow Gap along this mountain crest) via the Blue Ridge Pastures Trail, part of a planned 20-mile loop trail through the Upper Hickory Nut Gorge that’ll also incorporate such routes as the Bearwallow Mountain and Wildcat Rock trails.

Insider Tip:
– Parking’s quite limited at the Trombatore trailhead along Bearwallow Mountain Road, so Conserving Carolina recommends carpooling if at all possible.
– If you’re feeling particularly energetic and want to bask in some more far-reaching views, you might consider banging out both the Trombatore Trail to Blue Ridge Pastures and the Bearwallow Mountain Trail on the other side of Bearwallow Gap in one day. That’s a totally doable seven-mile affair, Bearwallow Mountain Trail being an easy round-trip two-miler with views of the Black Mountains, the Great Smoky Mountains, and the Great Balsam Mountains—the loftiest ranges in the Southern Appalachians—from the summit. 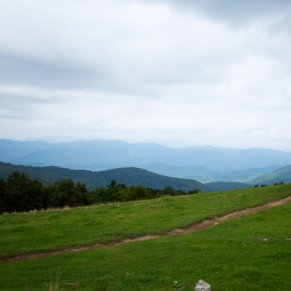 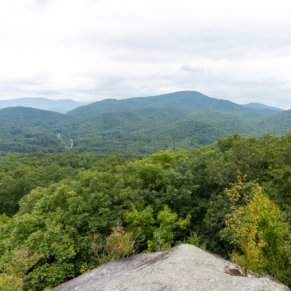 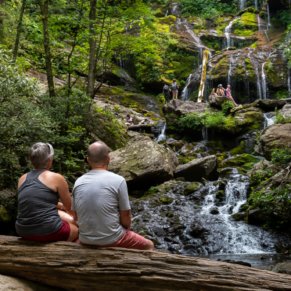