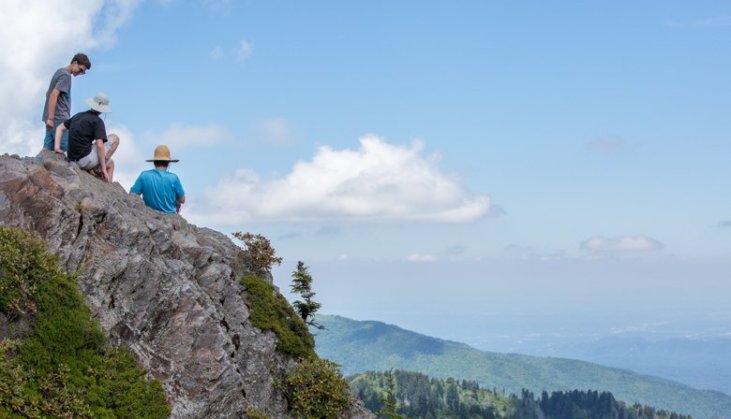 From big whitewater plunges in lush gorges to rocky crags rising along forested ridges, the Great Smoky Mountains claim some amazing natural features, even if this remarkable Southern Appalachian park is less known for just one or two iconic spots and more for across-the-board experiences and sightseeing.

In this blog post, we’re rounding up seven of the defining geological landmarks in the Great Smoky Mountains National Park. But first, we need to get a couple of caveats out of the way. Don’t mistake this for an exhaustive list by any means, but, rather, a representative one to inspire your explorations.

And among the features, we’re omitting are some of the best-known major mountain peaks such as Clingmans Dome and Mount LeConte, which most certainly stand tall (literally) among the park’s topographic attractions. (You can learn more about them, and the other loftiest summits in Great Smokies, in this recent blog post of ours.) We’re also leaving aside the dazzling waterfalls and cascades for which the range is famous: They deserve their own treatment!

Without further ado, let’s get rolling with this lineup of must-see Smoky Mountain natural features, presented in no particular order. 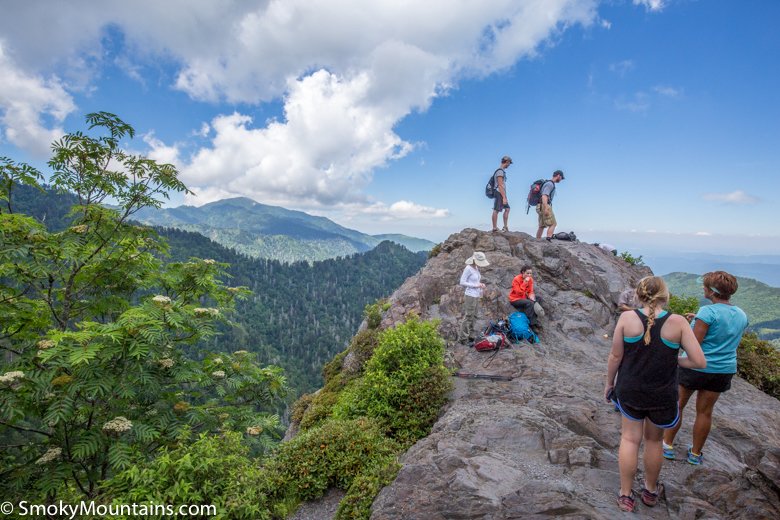 Among the more unusual place names in the Great Smoky Mountains for sure (alongside such winners as the Devils Tater Patch and Big Butt), Charlies Bunion is also the vantage for one of the national park’s most beloved views. The “Bunion” is a bulky crag outcrop on a 5,565-foot peak along the Smoky Mountain crest. It’s an expression of the geologic formation responsible for some of the most rugged topographic features in the Great Smokies: the Anakeesta Formation mostly made up of slate, phyllite, and metasiltstone, which also crops out just northeast of Charlies Bunion along the jagged ridge called the Sawteeth.

Where does Charlies Bunion’s odd name come from, anyway? It was given by the well-known regional author and Great Smokies advocate Horace Kephart, who on a 1929 visit thought the crag’s rough edifice looked a bit like his hiking partner Charlie Conner’s trail-sore toe. In other words, it had a pretty literal inspiration and now memorializes a small little nugget of Smoky Mountain history.

Hopefully (with well-broken-in hiking boots or shoes) you won’t develop a bunion yourself on the moderately challenging—and extremely popular—hike to Charles Bunion, an 8.1-mile (R/T) out-and-back walk on the Appalachian Trail via Newfound Gap. The view—enhanced by a 1925 wildfire that opened up the sightlines as well as subsequent erosion—is incredible, and dominated by Mount LeConte, third-highest peak in the Great Smokies and one of the most topographically prominent mountains in the Appalachians. 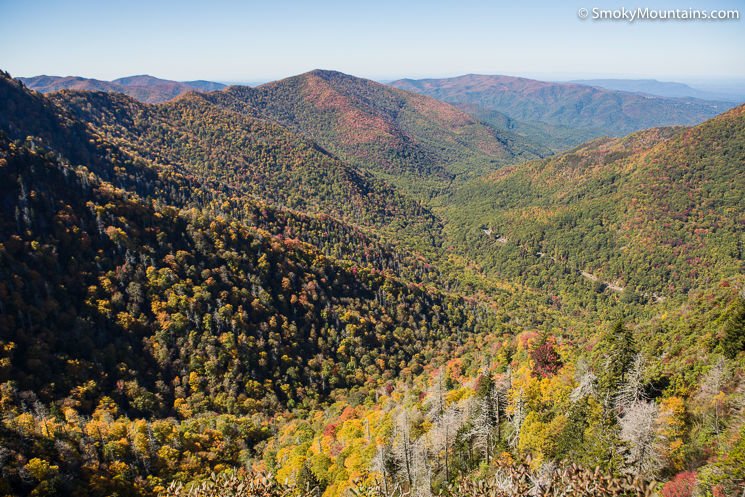 Another spectacular exposure of the Anakeesta Formation, the Chimney Tops rise from a northeastern spur of Sugarland Mountain overlooking the West Prong Little Pigeon River. These sharp double peaks come named for the natural chimney-like shafts in their outcrops, which form a striking backbone.

A recent wildfire prompted the National Park Service to re-route the end of the Chimney Tops Trail, which no longer accesses the formations themselves. But the view at the new turnaround point remains awesome: an up-close look at the bold “Chimneys” as well as prospects of Mount LeConte (and its leadup southeast ridge called “the Boulevard”) and Mount Mingus, among other peaks. 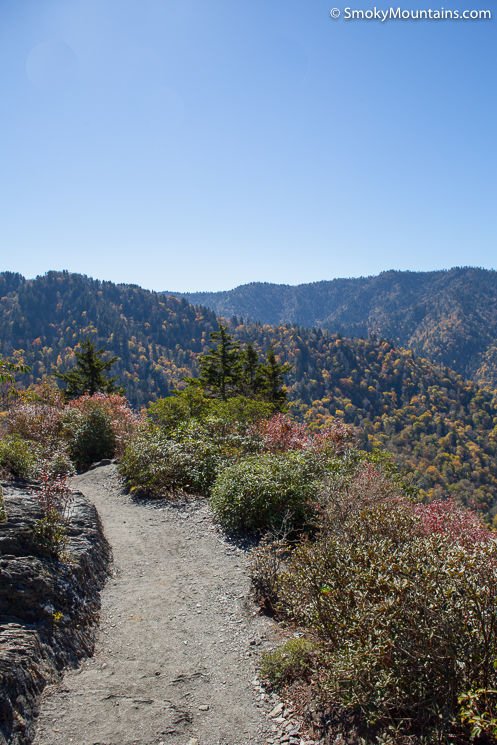 The Anakeesta Formation is also responsible for the huge, leaning rock face of the Alum Cave Bluffs, not a cave per se but rather a giant alcove set along the flanks of Peregrine Peak, a subpeak just south of Mount LeConte. It’s a much-photographed landmark along the Alum Cave Trail route to LeConte’s summit, one of a number of different trails accessing that mighty mountain from different directions.

During the Civil War, the Alum Cave Bluffs were harvested for saltpeter, mineral potassium nitrate used at the time in the production of gunpowder. The name of the bluff comes from alum, another mineral historically mined here that had a variety of uses, including for dyeing and medicine.

Impressive any time of year, the Alum Cafe Bluffs put on a special show in winter, when great icicles commonly form along the overhang: an unforgettable sight, and also a potential hazard—beware of falling icicles! 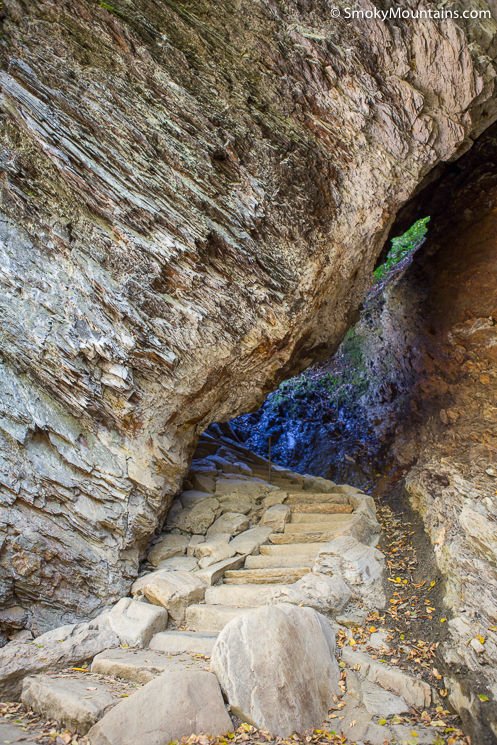 The Alum Cave Trail actually shows off several other fascinating geological landmarks besides the Alum Cave Bluffs themselves; when you consider you can also get to the top of Mount LeConte on this route, the trail’s easily one of the best in Great Smoky Mountains National Park for topographic sightseeing. Before you reach the bluff alcove, you’ll pass right through Arch Rock, a mass of Anakeesta slate threaded through by a narrow tunnel opened by the almost unbelievably drawn-out processes of repeated freeze-thaw cycles. The trail goes through this Arch Rock portal via stone steps and cable supports.

We haven’t exhausted the classic geological sights along the Alum Cave Trail. From Inspiration Point (between Arch Rock and Alum Cave Bluffs), and especially from a vantage just a little past it, you can spot in the near distance the so-called “Eye of the Needle”: a remarkably round-looking hole near the top of Little Duck Hawk Ridge. Freeze-thaw action is also responsible for this natural porthole, which is easily missed if you’re not looking for it. Little Duck Hawk Ridge, incidentally, is an important nesting site for peregrine falcons, perhaps the all-around most impressive avian hunters in the Great Smokies; while you’re scrutinizing the Eye of the Needle through your binoculars in the spring or summer, you might just turn up a sighting of one of these astonishingly speedy raptors. 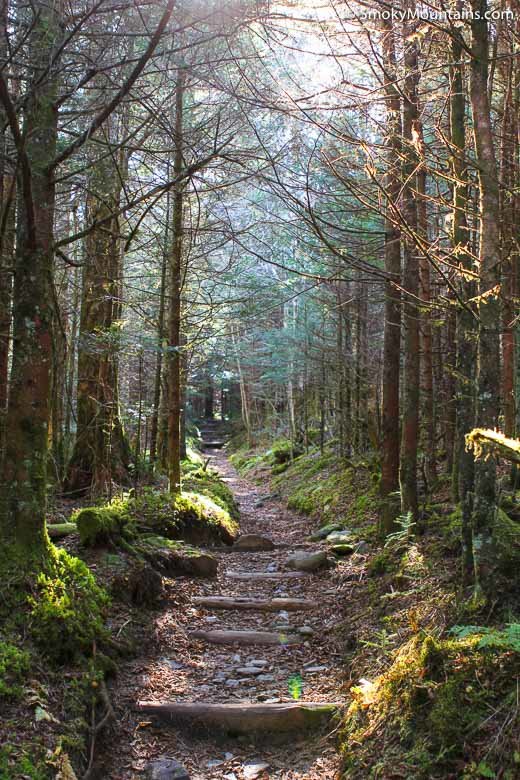 It doesn’t have the name recognition exactly of Clingmans Dome or Mount LeConte, but Sugarland Mountain is its own majestic Smoky Mountain uplift. It’s a striking high ridge that slants northwest off the main Great Smokies crest around Mount Collins and forms an important divide between the West Prong of the Little Pigeon River and the Little River. It rises above 5,000 feet and in many places narrows to a knife-edge along its long slice down from the heart of the range to its northwestern toe at Fighting Creek Gap.

The 12.1-mile-long Sugarland Mountain Trail is one of the great hiking adventures in the park: a high-country odyssey that typically delivers no small amount of solitude. We recommend tackling it as a shuttle day hike from south (at the Fork Ridge Trailhead off Clingmans Dome Road) to north (at the Laurel Falls Trailhead along Little River Road). 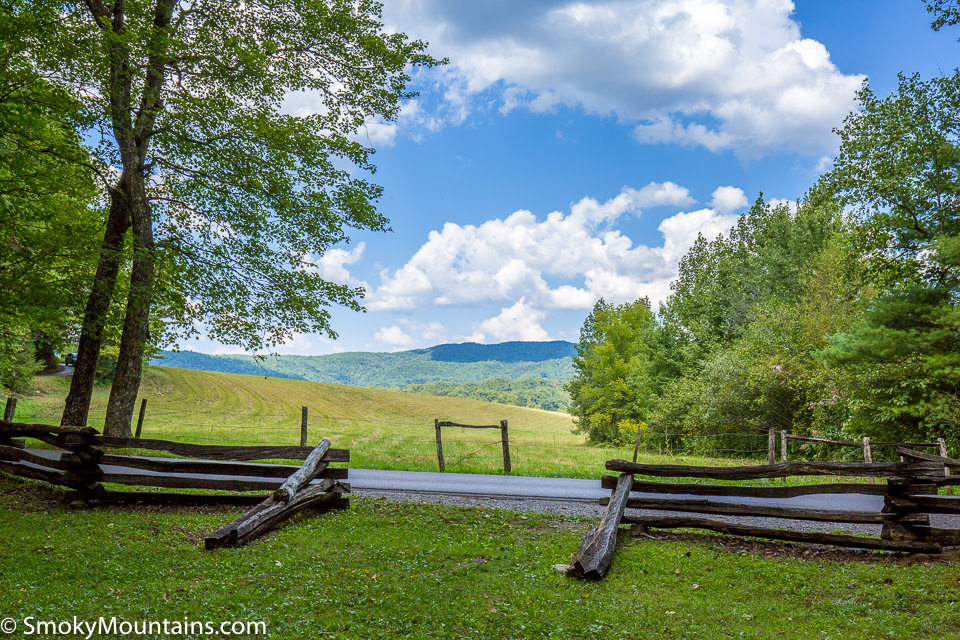 Cades Cove is, of course, one of the best-known and most-visited places in Great Smoky Mountains National Park, renowned for its scenic beauty, an abundance of historical buildings, and productive wildlife-watching. It also happens to be a fascinating geologic landmark in its own right: a prime example of what’s called a tectonic window, where erosion exposes younger rock buried beneath older layers. In the case of Cades Cove, it represents a limestone basin revealed when older Precambrian metamorphic rock thrust over the younger strata during Appalachian mountain-building was stripped away. It’s hard to overstate the resulting splendor: a pastoral lowland rimmed on all sides by looming ridges.

The rich soil weathered from Cades Cove limestone encouraged farming and Euro-American settlement of what in the early 1800s was a wild and remote place. (You can read more about the history of Cades Cove in this blogpost.)

Much of the rock in Great Smoky Mountains National Park is cloaked in the dense forest (or, in the case of Cades Cove and the other “windows,” buried in fertile soil) encouraged by the ample rainfall and temperate climate here. But that doesn’t mean incredible geology isn’t on display here, as the above examples demonstrate! 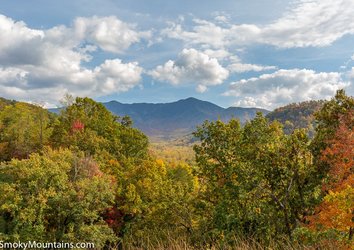 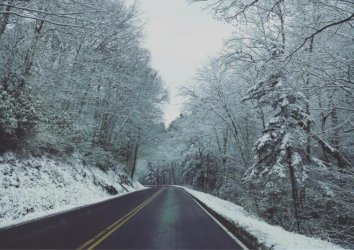