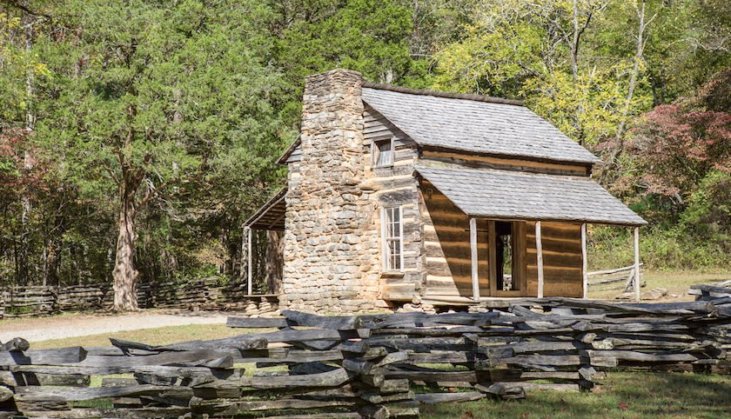 Among the most famous natural settings in the Southern Appalachians, Cades Cove is the most popular destination within Great Smoky Mountains National Park. Known as Tsiyahi (“otter place”) by the indigenous Cherokee, this limestone glen enclosed by heavily forested mountains offers one of the park’s most scenic and wildlife-rich drives (or bike rides). Its level terrain and fertile soil drew Euro-American settlers to Cades Cove in the early 1800s, and for more than a century the valley hosted a remote but good-sized community. Its plentiful relics today rank among Cades Cove’s top attractions.

Here’s a look at a dozen notable historical landmarks in this gorgeous mountain basin: 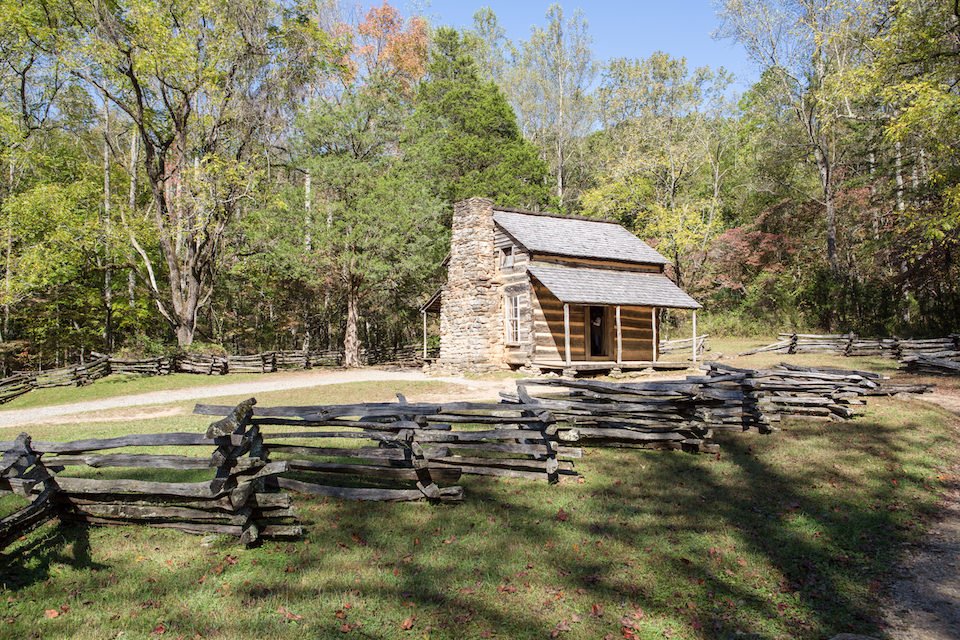 The John Oliver Cabin—the first historical relic awaiting you on the Loop Road, reachable via an easy five-minute stroll from the parking lot—is thought to be the oldest human structure still standing in Great Smoky Mountains National Park. It dates from the early 1820s, a more substantial replacement for the first crude shelter John Oliver built for himself and his wife, Lucretia, when they arrived in Cades Cove in the fall of 1818. (The remnants of the original shack’s chimney lie near the cabin.) The Olivers were the initial permanent white settlers in this wild valley, which John Oliver’s friend Joshua Jobe had recommended as a place for John to establish his dreamed-for farmstead.

The John Oliver Cabin isn’t just the oldest standing building in the national park: It was also among the last to be vacated with the establishment of the park. 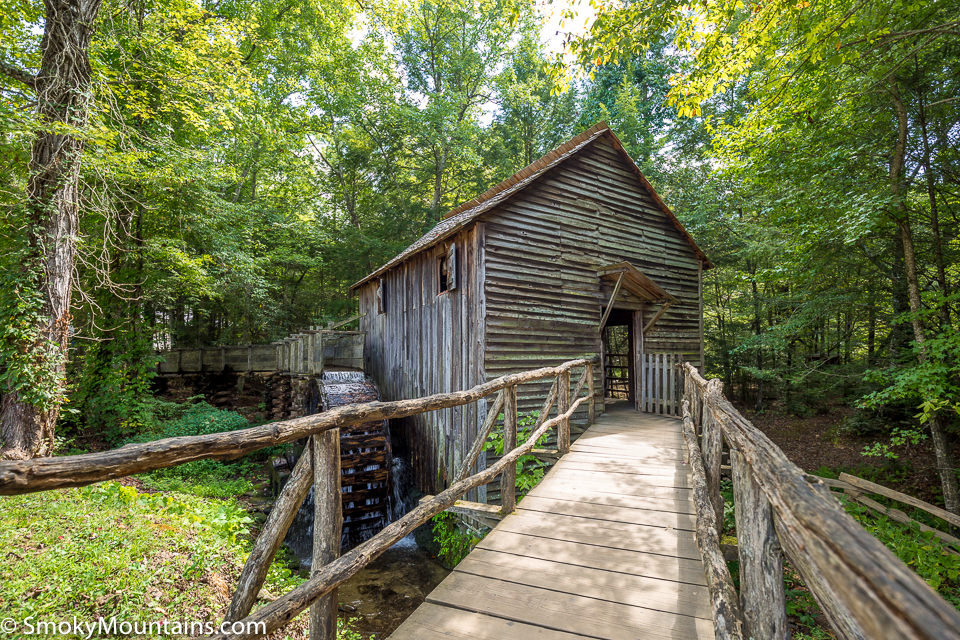 A definite highlight of Cades Cove’s historical lineup about halfway along the Loop Road, this working gristmill was built in 1867 by John Cable to provide homesteaders with a facility for making flour and to process lumber. Its fundamental importance in the community of 700-odd residents extended beyond grinding flour, however: The Cable Mill was also a social hub, especially on Saturday mornings.

The Great Smoky Mountain Association operates the Cable Mill from April to October, and besides seeing its time-tested technology at work you can come away with a unique souvenir: cornmeal freshly ground by the mill’s original stones. 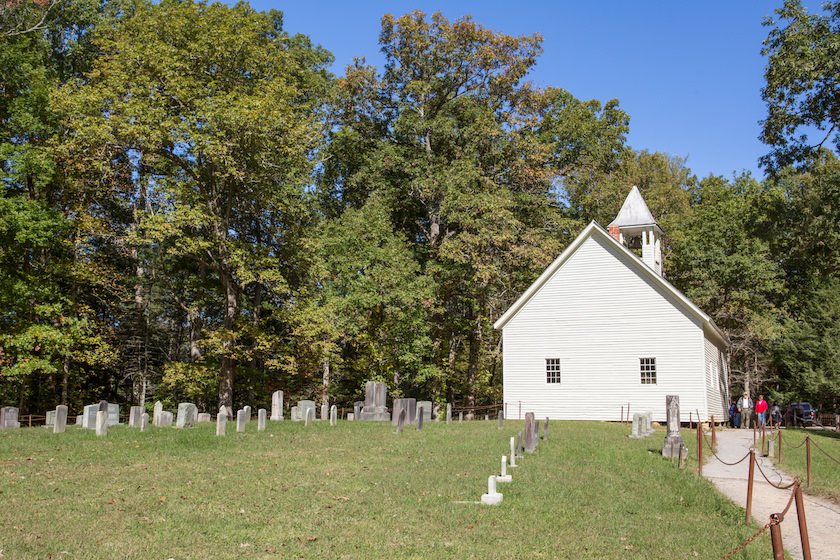 The first of the several churches that came to serve the spiritual (and social) needs of the Cades Cove community, the Primitive Baptist Church was established in 1827, though the building you see here was erected some 60 years later. This was a couple of decades after the Civil War, during which the Primitive Baptist Church suspended its gatherings on account of its congregation’s Union allegiance in an area heavily supportive of the Confederacy.

You can reach the Primitive Baptist Church—the wooden ceiling of which still bears the handprints of its carpenters—via the first turnoff along the Cades Cove Loop Road after the John Oliver Cabin. 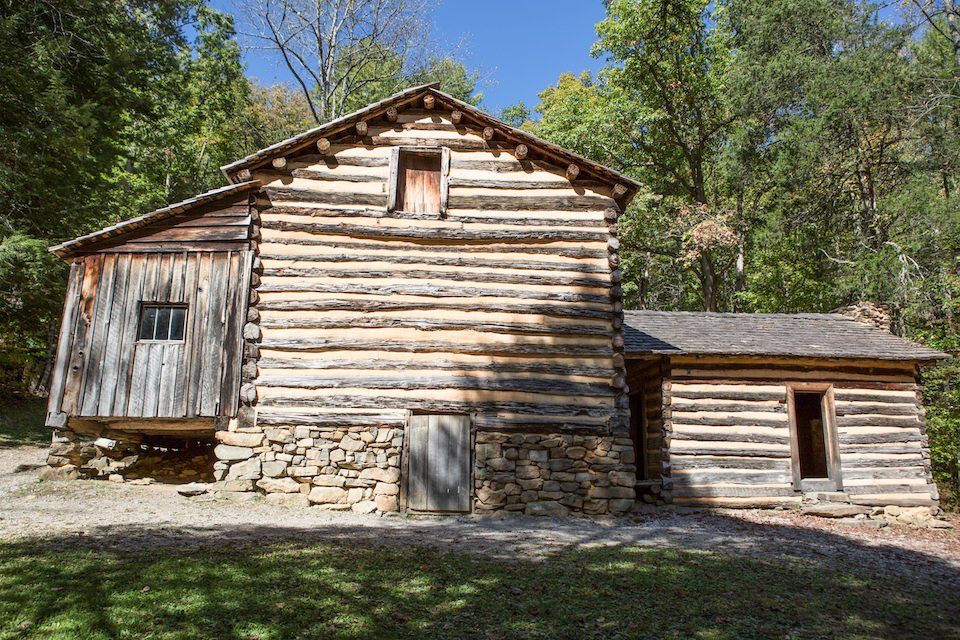 Explored on a milelong hike, the Elijah Oliver Place is the most isolated and secluded of the major historical sites along the Cades Cove Loop Road, and as such it gives perhaps the most striking sense of what settler life was actually like back in the 19th century.

Elijah Oliver was born to John and Lucretia, the first white settlers in Cades Cove, in 1824. He left the valley at the onset of the Civil War, but returned in 1865 to build this cabin complex. He served as a deacon with the Primitive Baptist Church.

The main cabin at the Elijah Oliver Place includes a small room off the porch, the “Stranger’s Room,” which provided overnight accommodations to travelers. 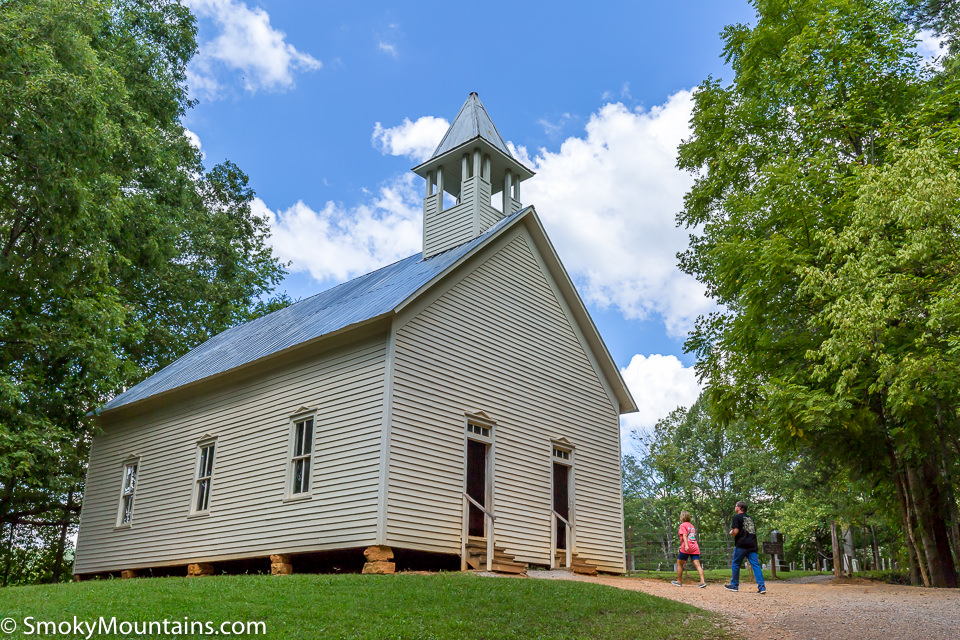 It includes two doors: a separate entrance for men and women, per Methodist custom of the time. The churchyard cemetery, meanwhile—among the oldest in Cades Cove—harbors more than 100 graves. 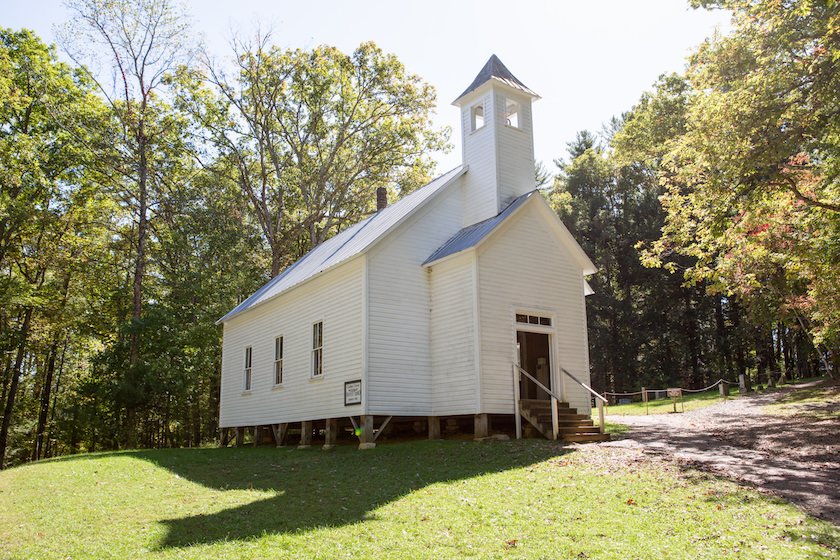 In 1841, a schism within the Primitive Baptist Church—the first church to be established in Cades Cove and the largest during the 19th century—prompted the establishment of the Missionary Baptist Church, which spent decades without a dedicated congregation space. This church building dates from 1915, when it replaced the 1894 original on Hyatt Hill to accommodate a booming congregation. 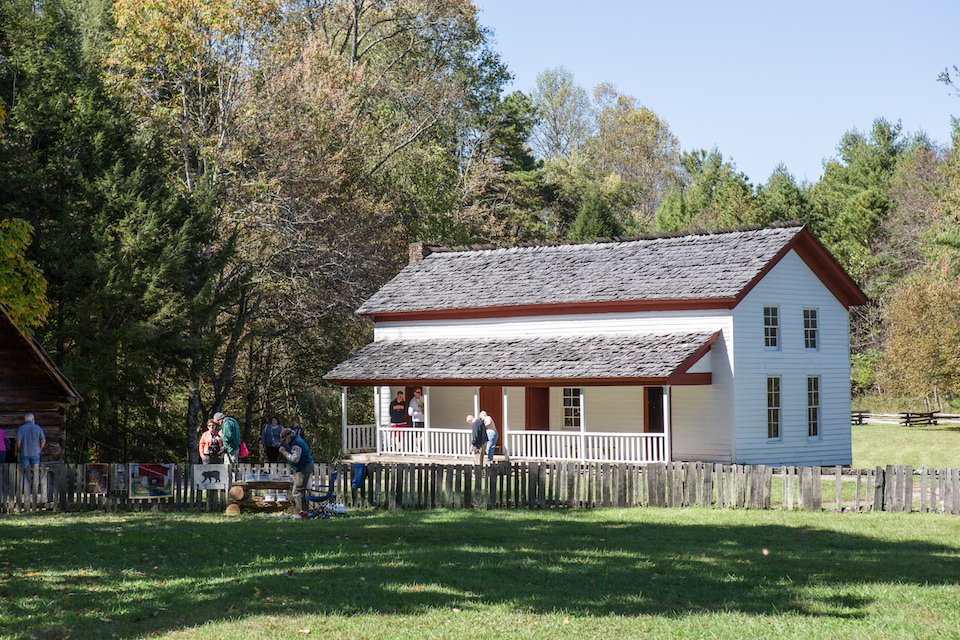 This handsome home near the Cades Cove Visitor Center symbolizes the life of one of the valley’s most remarkable inhabitants: Rebecca Cable, an incredibly hardworking and generous-hearted businesswoman who lived to nearly 100. She and her brother, Dan—the children of John Cable, who established the well-known (and still operating) Cades Cove gristmill—bought this 1879-built house from the Gregg family. The siblings originally continued operation of the Greggs’ store, but then converted the place to a boardinghouse.

Rebecca Cable, who never married or bore children, was renowned for her energy and work ethic, operating the gristmill, farming, and tending cattle.  This notable Cades Cove personality passed away in 1940, after which the house named for her was moved to its present location. 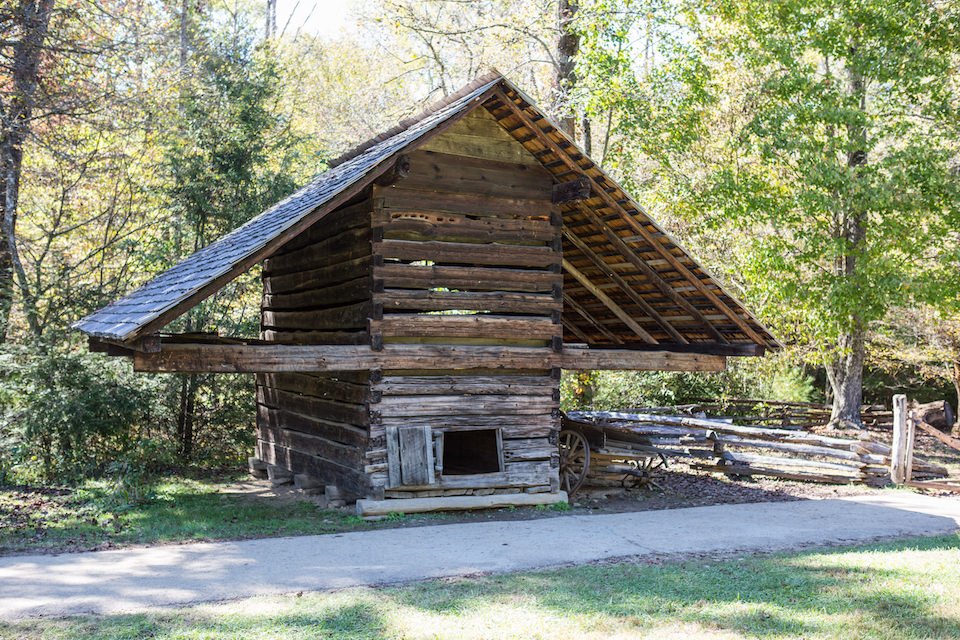 This distinctive-looking wooden structure served quite the critical role drying and storing corn, a dietary staple for Cades Cove homesteaders. They made corn into such foods as hominy, cornbread, and grits once it had been ground at gristmills such as the nearby Cable Mill.

The open slats of the corn crib—raised up to prevent rodents from raiding the contents—allowed for air to circulate within, drying the stockpiled cobs. 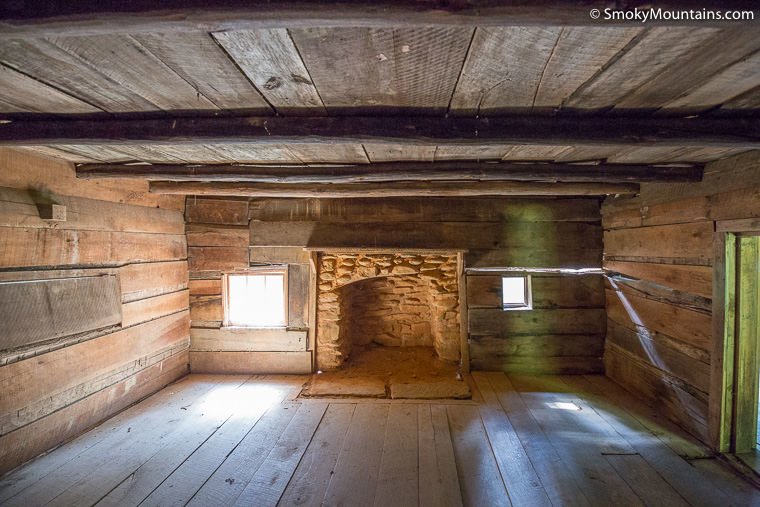 There’s quite a fascinating story embodied in the Henry Whitehead Place, located a few minutes from the Cades Cove Visitor Center off Forge Creek Road. It encompasses not one but two wooden cabins: one large and impressively crafted, the other small and rough, and the two joined together at the roof for a covered space between.

The rough cabin was built for Matilda “Aunt Tidy” Shields by her brothers and members of the Cades Cove community after she was abandoned by her first husband: a marital breakup rare here in those early days. When she married Henry Whitehead, he built this more spacious and elaborate home from sawn logs right in front of the original. 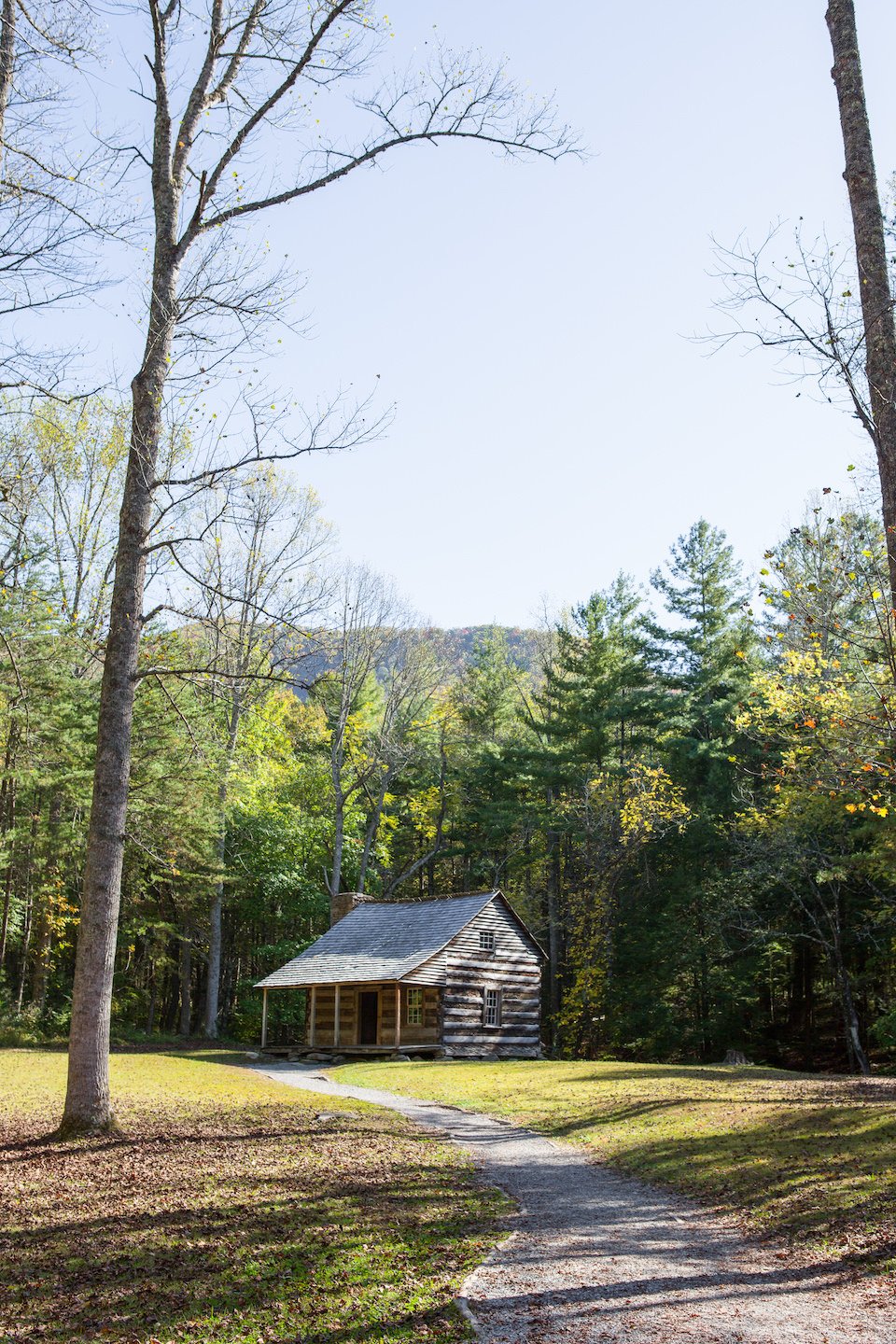 This simple but attractive wooden cabin marks the last historical structure on the Cades Cove Loop Road. Likely built circa 1880 by William Sparks, it later came to serve as the residence of the Civil War veteran Carter Shields, who was injured during the Battle of Shiloh in 1862. Shields lived here from 1910 to 1921.

This is an especially photogenic site in springtime, given the smart-looking log home and its split-rail fence against a backdrop of blooming dogwoods. 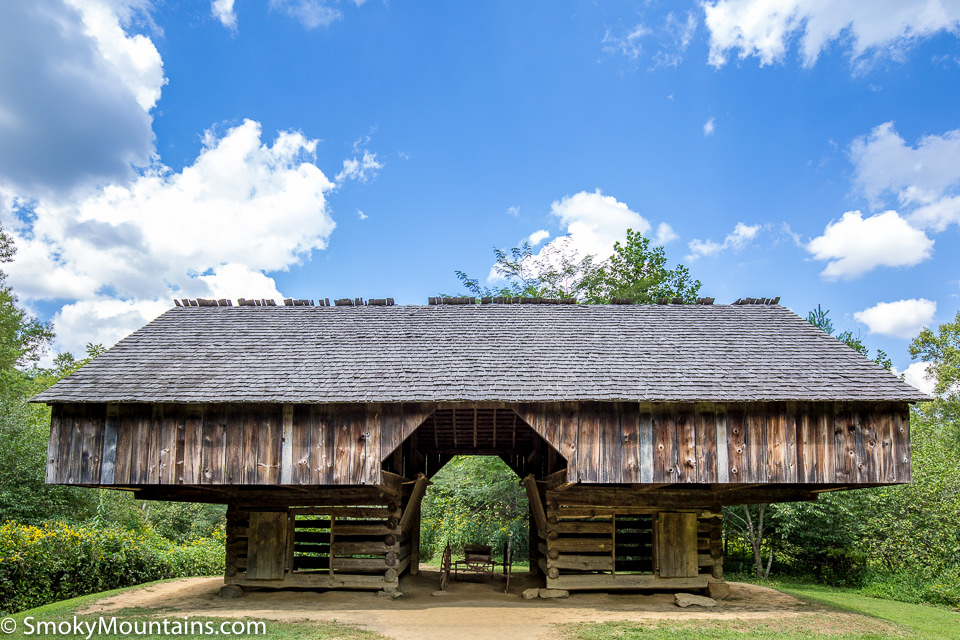 Though the cabin at the Tipton Place was built in the early 1870s by the Civil War veteran Colonel Hamp Tipton, the property itself was first settled some five decades before by a forebear of his, William “Fighting Billy” Tipton, who’d served in the Revolutionary War. Besides the two-story cabin, the Tipton Place includes a large cantilever barn, a 1968 replica if the original; its structure allowed wagons to pull right in for loading and unloading. 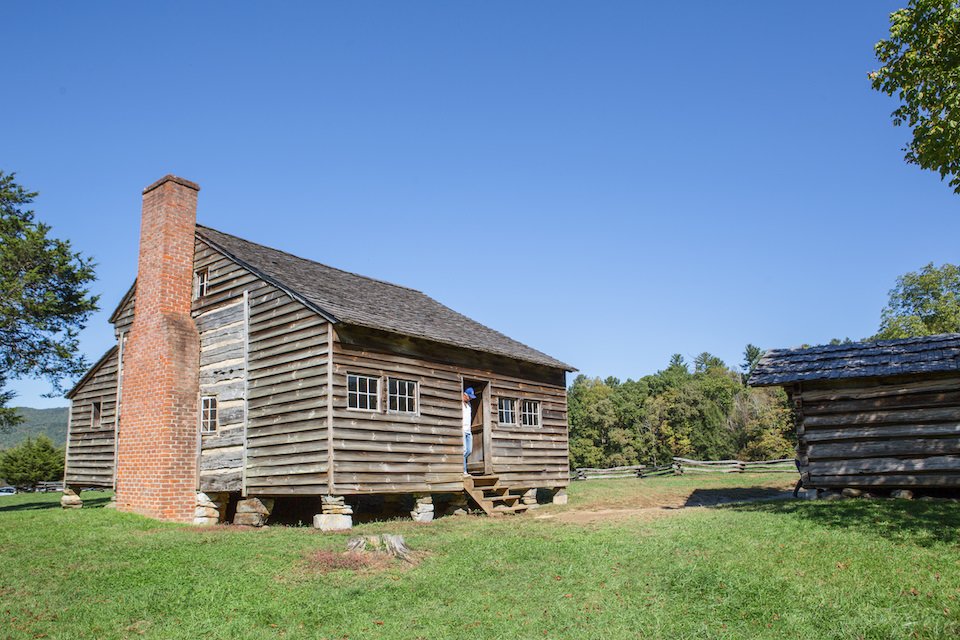 This impressively put-together cabin, situated just before the Tipton Place on the Loop Road, was built in 1856 and features an interesting blend of features, including both sawn and hewn lumber and a brick chimney. It likely owes some of the caliber of its design and carpentry to the assistance Peter Cable, who originally owned the property, is suspected to have given his son-in-law, Dan Lawson, in its construction. 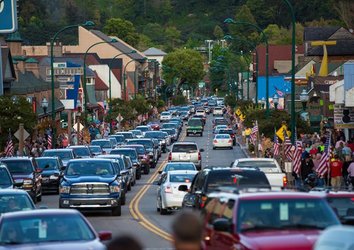 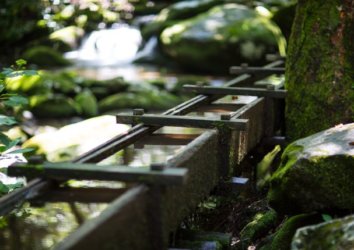