Site Navigation
#7 of 12 Cades Cove Things To Do

The Cades Cove Methodist Church, which was initially established in the 1820s, initially met in a simple log structure with a small fire pit and dirt floor.

In 1902, the current building was constructed in 115 days at a cost of $115 by the carpenter and pastor John D. Campbell. The cemetery behind the church has over 100 graves and is the second oldest in the Cove.

What is the reason for two front doors? The Methodist church believed men and women needed to meet separate. Although there were two entrances, the Methodist Church did not opt for a physical divider down the middle of the chapel – this was also common practice during the timeframe.

During the Civil War and following reconstruction, the Methodist Church entered tumultuous times and the church experienced a split due to differences in religious beliefs. 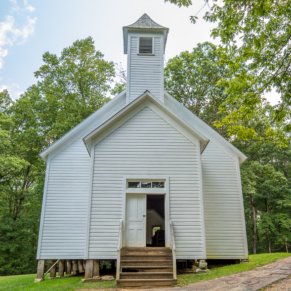