Site Navigation
#2 of 12 Cades Cove Things To Do

The John Oliver historical cabin, which is set back from Cades Cove Loop Road, is the first historical structure you will come to. The parking area for this cabin is immediately past Sparks Lane.

John and Lucretia Oliver, the original owners of the cabin, were the first permanent white settlers in Cades Cove. When they moved to Cades Cove in the 1820s, the only road into the cove was a primitive trail and there was not a working grist mill.

In the absence of a grist mill, the Olivers had to beat corn into cornmeal using only a mortar and pestle. During the early years, Lucretia feared she would starve to death.

Now, the Oliver cabin is one of the most visited historical structures in the National Park. The cabin is held together by gravity and notched corners – it does not need pegs or nails to hold it together.

Although the National Park Service eventually took control of the structure, it was one of the last historical structures to be vacated. The cabin remained in the Oliver family for over 100 years!

This historical structure is an easy five minute walk from the parking area. 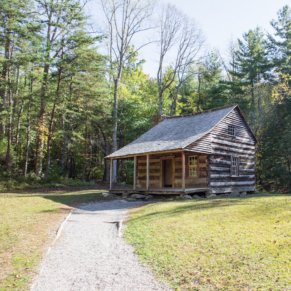