Site Navigation
#11 of 112 Asheville Things To Do

The Historic Johnson Farm offers visitors of all ages a chance to learn about the workings of an early 20th century North Carolina mountain farm. Guided tours, including entry to the house, are offered weekday mornings for a small fee; visitors can walk the grounds in the afternoon for free. Keep in mind it's a farm, not a petting zoo, and school groups frequent the site, especially in the fall and spring.

You could say Sallie Johnson and her sons were pioneers of the agritoursim movement. In the first decades of the 1900s, the family welcomed visitors to see what life was like on their Hendersonville, N.C. farm. In exchange for $5 a week, guests received lodging, three meals a day, the chance to do honest-to-goodness farm chores and homemade ice cream and square dances on Sundays. Visitors returned year after year to spend time at the Johnson’s mountain retreat, which was constructed in 1880 for a wealthy tobacco farmer using bricks fired on site with mud from the nearby French Broad river.

Visitors to Historic Johnson Farm won’t receive an overnight, immersive experience like days of old, but you will get to tour the red-brick house, boarding annex and grounds for a nominal fee of $5 for adults and $3 for kids. The two-story brick home is packed with furnishings, dishes, hand-operated tools and other items from daily life in the early 20th century. Ten outbuildings make up the property’s grounds, including a granary where corn was stored, a blacksmith shop, a smokehouse where meat was cured, a barn for animals and equipment storage and an 11-room boarding annex built by Sallie Johnson’s sons in 1923. The 15-acre property’s grounds also include picnic tables and two tree-lined walking trails to explore.

Located about 20 miles south of Asheville, the site is listed on the National Register of Historic Places and is designated as a North Carolina Cultural Treasure. Adding to the cultural flair, the Heritage Weavers and Fiber Artists, has established a fiber arts center in the former boarding annex. The center offers classes in fiber arts classes like knitting, rug hooking, bobbin lacing, weaving and spinning, and sells handicrafts in a gift shop that’s open weekdays from 10 a.m.- 4 p.m.

Sallie Johnson’s two bachelor sons lived at the farm until their deaths in the 1980s. In their wills, they left the property to Henderson County Public School System so it could continue to serve as an educational resource for future generations. Since the farm is owned and operated by the school system, lots of school groups come for tours. The farm’s event calendar on the Henderson County Public Schools’ website lists when field trips are scheduled, so be sure to check if you want to avoid a throng of youngsters. Annual fair in the spring and winter also draw many people from the surrounding community.

Insider Tip:
– You can explore the grounds even when the farm is officially closed. Self-guided audio tours are available at any time, but the buildings, including restrooms will probably be locked. The Historic Johnson Farm follows the Henderson County Public School system’s calendar for the most part, but does maintain a limited schedule in the summer months. 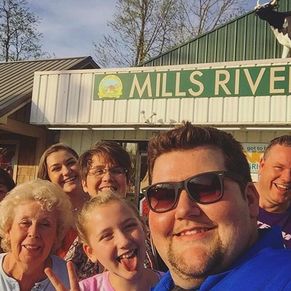