The roughly six-mile round-trip hike up Looking Glass Rock takes you to one of North Carolina’s most iconic summits. Spectacular viewed from afar, Looking Glass Rock offers stunning vistas from the top of its giant plunging granite walls: an unforgettable reward for hikers willing to huff it on a moderately challenging, switchback-heavy trail.

Although it’s much shorter than the loftiest peaks of the Southern Appalachians nearby, 3,969-foot Looking Glass Rock definitely ranks as one of the great mountains of North Carolina. This spectacular monolith is instantly recognizable with its enormous stone faces: the 390-million-year-old Whiteside Granite composing what geologists call a “pluton,” a big mass of lava that solidified underground. The Looking Glass Rock Trail on the Pisgah National Forest takes you to the top of this gleaming peak on an unforgettable summit hike.

Rising out of a sea of rolling forest, Looking Glass Rock gets its name from the shimmery appearance of its bare cliffs sheened with rain or ice. Many visitors know its stunning look best from the Looking Glass Rock Overlook along the Blue Ridge Parkway.

The monolith is never more extraordinary-looking than in the morning when those big rock walls catch the rays of the rising sun. If, as often happens, the surrounding valleys are cloaked in morning fog and Looking Glass Rock rises clear out of the low clouds, the scene gets utterly magical.

Those grand sloping walls of Looking Glass Rock provide some of the finest rock climbing in the state and also draw nesting peregrine falcons.

If you’ve gazed at stone-sided Looking Glass Rock from the Parkway and felt a tug, you’re not alone. Hike the Looking Glass Rock Trail, less than an hour from Asheville, to get up close and personal with this magisterial mountain.

The roughly six-mile trail to the top and back is not necessarily easy. This is a moderately difficult trek tackling more than 1,600 feet of elevation gain across only a few climbing miles. Hikers claim that getting to the top takes roughly an hour and a half and getting down roughly an hour more. Be prepared to sweat a bit—and definitely bring plenty of water, as sources are limited along the trail.

The climb gets underway right from the start. The woods you pass through as you ascend are pretty, full of the dense thickets of rhododendron and mountain laurel that define so many Southern Appalachian understories. Also keep an eye out for the dark, feathery canopies of Carolina hemlock, a geographically restricted conifer well represented on Looking Glass Rock’s slopes.

At about the two-mile mark, you come to a natural resting spot: a rock platform used as a rescue helipad. Take advantage of the flat vantage to snack up, hydrate, and prepare for the final push.

Topping out at the true summit, you’ll soon drop to the hike’s big payoff: the wide-open brows of Looking Glass Rock’s northern walls. Gaze out to the Blue Ridge Parkway, the Pisgah Ridge, the Great Balsam Mountains.

In the foreground, the granite falling away is its own mesmerizing sight—but don’t get too mesmerized! Hikers have been injured and killed by falls up here. The drop-offs are dangerous, and the pitch of the rock can be deceptive: It sort of sneaks up on you if you’re unwise enough to creep too far down. Be especially careful if you have young children.

The return hike is an easier descent—plus, you’ll still be glowing from the thrill of standing atop Looking Glass!

Insider Tip:
The Looking Glass Rock Trail isn’t necessarily a great hike for dogs, given the danger of the terrain; if you bring your pooch, keep it leashed. 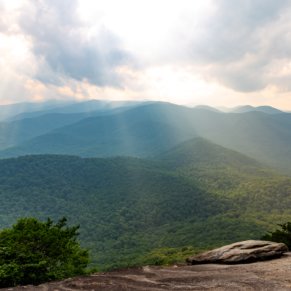 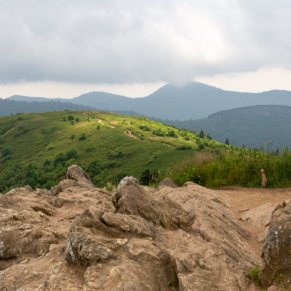 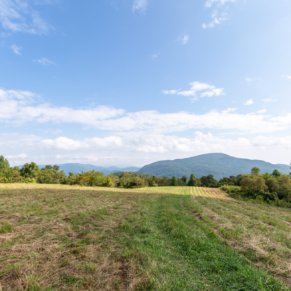