This strenuous, but short hike pays off with stunning views of High Falls. Near the falls, you can relax on a boulder and watch kayakers explore the rapids. You'll descend into the gorge to reach the falls, then work hard on the return trip to climb over 500 feet via stone stairs.

The powerful High Falls, just below Lake Grenville on the West Fork Tuckasegee River, turns into the most forceful waterfall in the entire state several days a year, when the Glenville Dam is released for whitewater kayakers. Visit on one of those days to get an incredible experience of the power of water, or enjoy this challenging yet rewarding hike any time in spring or summer.

The trail is also called Cullowhee Falls, but most people refer to it as High Falls. The stunning, recently-developed trail combined with the chance to see the biggest falls in the state on release days make this a five-star hike.

You’ll descend over 500 feet into a heavily forested gorge before getting close to the falls, then return the same way — facing a steep uphill scramble.

Pines Recreation Area Lot
The hike to High Falls starts from the Pines Recreation Area parking lot, which is located one-half mile from the bridge over the Glenville Dam. The first 0.15 miles of trail follow a gravel road along the lake shore. Along the road, you’ll spot climbing vines and rhododendron shrubs. The trail can be popular during spring months, when the rhododendrons are in bloom.

You’ll see views of Glenville Lake before leaving the gravel road and beginning your descent into the gorge. The trail was constructed in 2013, yet it is so well integrated with the surrounding forest that it appears much older.

When you leave the road, you’ll walk down stairs constructed from stone. For support, grab the twisted wood hand rails. At the 0.25 mile mark, the trail veers west. If you listen, you’ll start to hear the West Fork Tuckasegee flowing gently. Follow the trail downstream over more stone steps and a beautiful hemlock bridge. The trail turns north with the river, then crosses another raised bridge.

Just over 0.6 miles from the parking lot, you’ll spot a small waterfall. Don’t be fooled — this isn’t your final destination. Stay on the marked trail and keep going down. When you see the large, moss-covered boulders, you’ll know you’re almost to the waterfalls. If it’s a dam release day, the pounding of the falls will be audible by now.

Water’s Edge
Year round, the falls generate hydroelectricity for Duke Energy. Most of the time, there’s only a thin stream of water plunging over the falls because the water is diverted. If you want to see the true power of these falls, you’ve got to time your hike with the dam release days. On these days, the swirling water creates strong rapids, so do not get in the water for your own safety.

Once you are finished enjoying the waterfall, you will return to the parking area via the stone steps. The return trip is strenuous. If you need a break from the climb, stop for some water and admire the scenery. 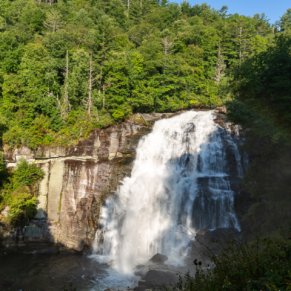 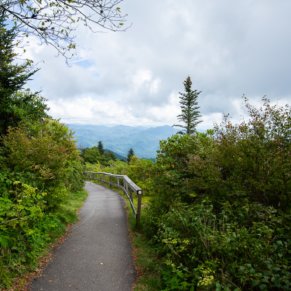