Housed in a historic building that dates back to 1907, Pack’s Tavern brings a classy, yet chill ambience to the heart of Asheville. The restaurant is tough to miss; located adjacent to Pack Square Park, it boasts a vintage yellow keg truck labeled “juice box” out front.

The building that houses Pack’s Tavern is steeped in history. Built by a lumber supply company, it was once an auto parts store. During Prohibition, it took on a new role: moonshine distribution center. Due to its unique history, Pack’s is presently designed to reflect a 1932 bar shortly preceding Prohibition’s demise.

Arrive hungry; like many Asheville establishments, Pack’s Tavern is known for its massive portions. Smaller portions are available on the lunch menu every day between 11 am and 3 pm.

Whether you prefer the gluten-free menu, the lunch menu, or the standard all-day selection, you’re encouraged to order a drink with your meal. The tavern’s beer selection is impressive, with brews from throughout the state of North Carolina offered. Top beers include Asheville Brewing’s Shiva IPA and rotating varieties of Los Province. In keeping with its gluten-free vibe, the restaurant also offers two gluten-free beers.

If you’re not in on the Asheville beer scene, don’t worry; Pack’s Tavern serves a variety of mixed drinks. Kick back with Pack’s Orange Crush or the Silver Cadillac Margherita. Not in the mood for an alcoholic beverage? Treat yourself to draught root beer, or better yet, a root beer float.

When the weather cooperates, head out to the patio for some of the most pleasant restaurant seating in Asheville. Amp up the excitement and challenge your friends to a game of cornhole. Keep an eye out for four-legged friends; because the restaurant is dog-friendly, pooches regularly hit up the patio on comfortable summer days.

A few of our favorite menu items include:

Southern Fried Cobb Salad
This might not be the healthiest salad you’ve ever eaten, but it includes at least a few veggies. More importantly, however, your new favorite salad features delectable chicken tenders, chopped bacon, cheddar jack cheese, and herbed croutons. For the final touch, choose your favorite dressing.

Bison Meatloaf
This isn’t your grandma’s meatloaf, but it sure is satisfying. Served with mushroom-sage gravy and alongside mashed potatoes and roasted Brussels sprouts, Pack’s bison meatloaf puts a welcone spin on a comfort food staple.

Pesto Chicken Pizza
A perennial favorite among Asheville’s pesto lovers, this enticing pizza features grilled chicken, artichoke hearts, mozzarella, and of course, pesto. It’s a great option when you want a lighter pizza that still includes meat. Like all pizzas served at Pack’s Tavern, the pesto chicken version can be ordered with a gluten-free crust for an extra charge.

With such a wide range of appetizers, sandwiches, and entrees, it’s easy to see why the mere thought of a visit to Pack’s Tavern makes regular visitors’ eyes light up. Whether it’s your first visit or your hundredth, you’ll be welcomed with open arms.

Insider Tips
-Live events are a big deal at Pack’s Tavern. Stop by on Friday nights for the tavern’s weekly dance party with DJ MoTo. On Sunday afternoons, local musicians perform on the patio. Additional performances are regularly scheduled for Thursday and Saturday evenings. Keep an eye on Pack Tavern’s social media accounts for event updates. 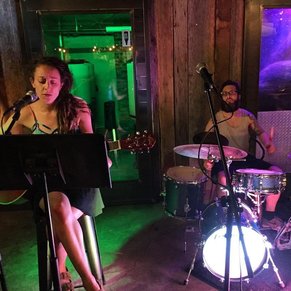 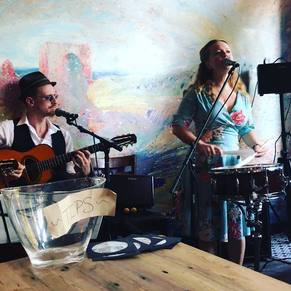