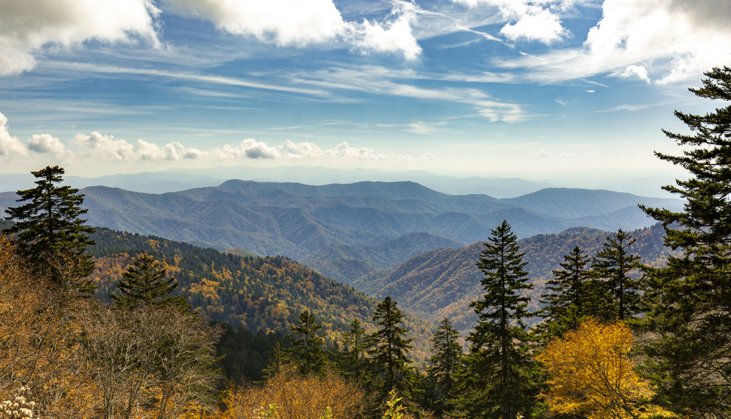 We may still be basking in hot summer weather, but it’ll be fall before you know it. And with the seasonal shift comes the annual slowdown of photosynthesis among America’s deciduous trees, and consequently some of the world’s most acclaimed fall foliage colors. “Leaf-peeping”—sightseeing based around these autumn-painted canopies—has never been so popular, and you’ve got great opportunities for the pursuit all across the U.S.

Here’s a look at our picks for the 10 best destinations for fall colors in the country—well, 10 of the best, anyhow! 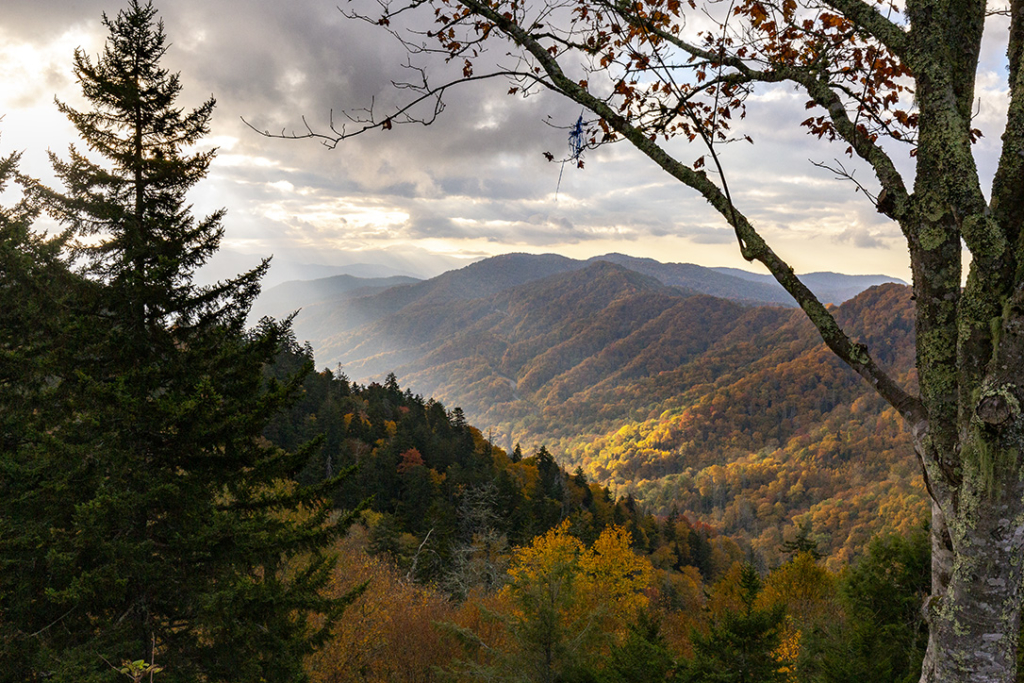 With some 100 species of native trees and thousands of feet of elevational spread, the Great Smoky Mountains make one of the most outstanding and celebrated leaf-peeping destinations in the Southeast. The annual color show kicks off in mid-September in the high country as mountain maple, yellow birch, and other canopies turn, then gradually spreads downslope for an awesomely drawn-out show. The pinnacle of Smoky Mountain fall color takes place on the lower slopes and valley bottoms from mid-October to early November as sugar and red maples, hickories, scarlet oak, sweetgum, and other broadleafs strut their stuff.

(Check out our roundup of the best trails for basking in the Smokies’ fall colors right here!) 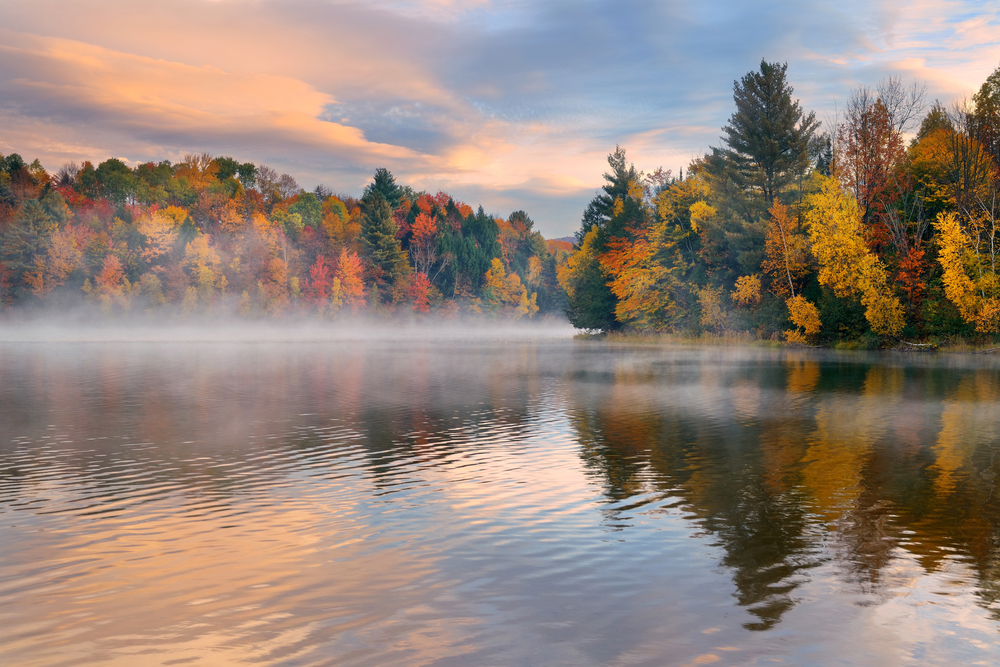 The charming ski town of Stowe—set in the shadow of 4,395-foot Mount Mansfield, the loftiest peak in Vermont—is a downright legendary spot for fall colors. From the slopes of the Green Mountains and Worcester Range to the banks of the Little River, Stowe enjoys an extended foliage spectacle—maples, birches, red oaks, elms, sumacs, and other players—that typically runs from early September through mid-October; the most intense colors usually climax between the end of September and the first week or two of October. 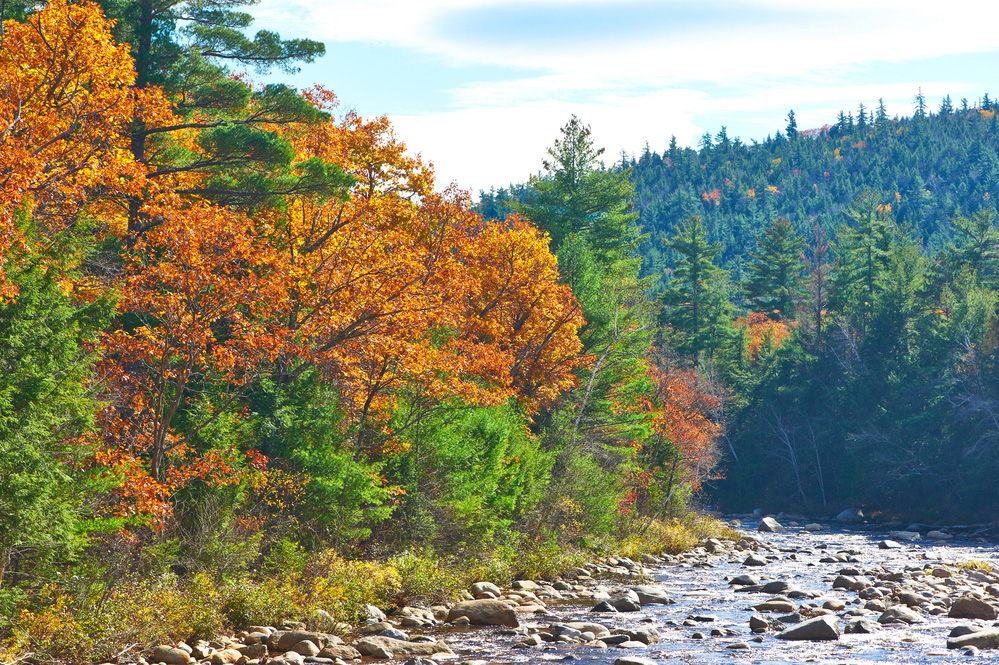 The White Mountains of New Hampshire are another absolute mecca for fall colors. Host to the highest peaks in New England (in fact, the highest peaks in the East north of the Southern Appalachians), the range offers sweeping scenery—tundra mountaintops, glacial cirques, deep gorges—and vast forests with plenty of hardwoods to smolder in autumn. The peak of fall color in the White Mountain National Forest roughly aligns with Stowe’s: usually the last week or so of September into the second week of October. Good leaf-peeping spots in these spectacular highlands include Mount Washington, Franconia Notch State Park, and the roughly 35-mile Kancamagus Scenic Byway between Conway and Lincoln. 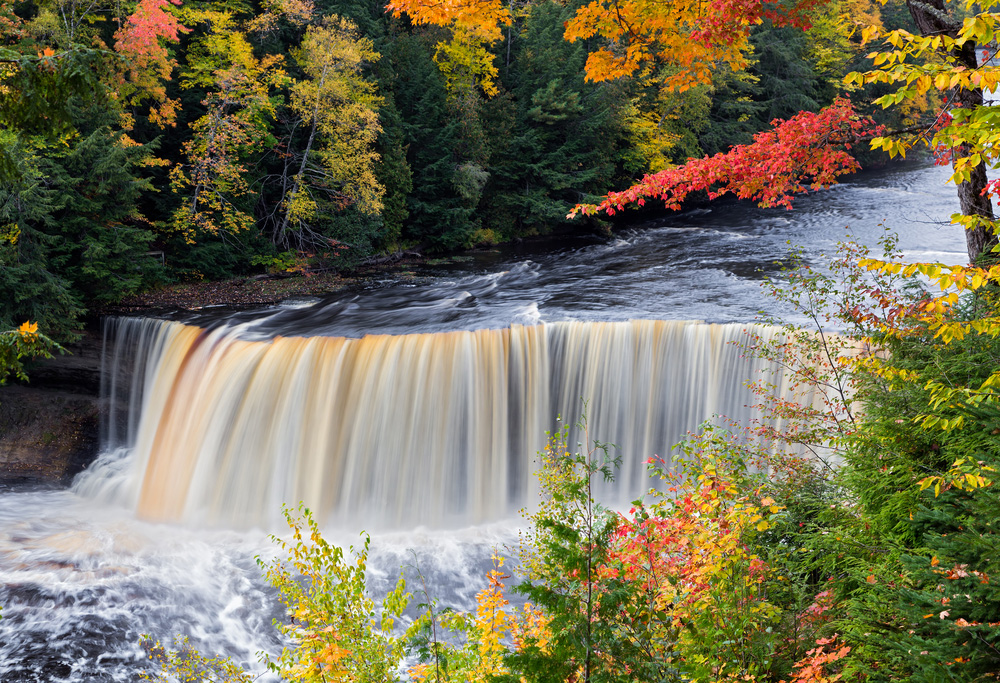 Tahquamenon Falls in Michigan’s eastern Upper Peninsula is seen with colorful fall foliage. This beautiful waterfall is said to be the second-largest in the United States east of the Mississippi River.

You’re spoiled for leaf-peeping options in Michigan’s wild and mostly forested Upper Peninsula, but for all-out postcard-worthy views it’s hard to beat Tahquamenon Falls. The upper plunge of this extraordinary water feature, close to 50 feet tall and better than 200 feet across, ranks among the biggest waterfalls in the East, and the leaching of natural tannins into the Tahquamenon River from its heavy-timbered watershed gives the flow a striking brownish color—hence the nickname “Root Beer Falls.”

Needless to say, this epic cataract looks all the more stunning when framed by the glowing reds, oranges, and yellows of the surrounding forests’ northern hardwoods. Peak color usually lands sometime between the end of September and the beginning of October. 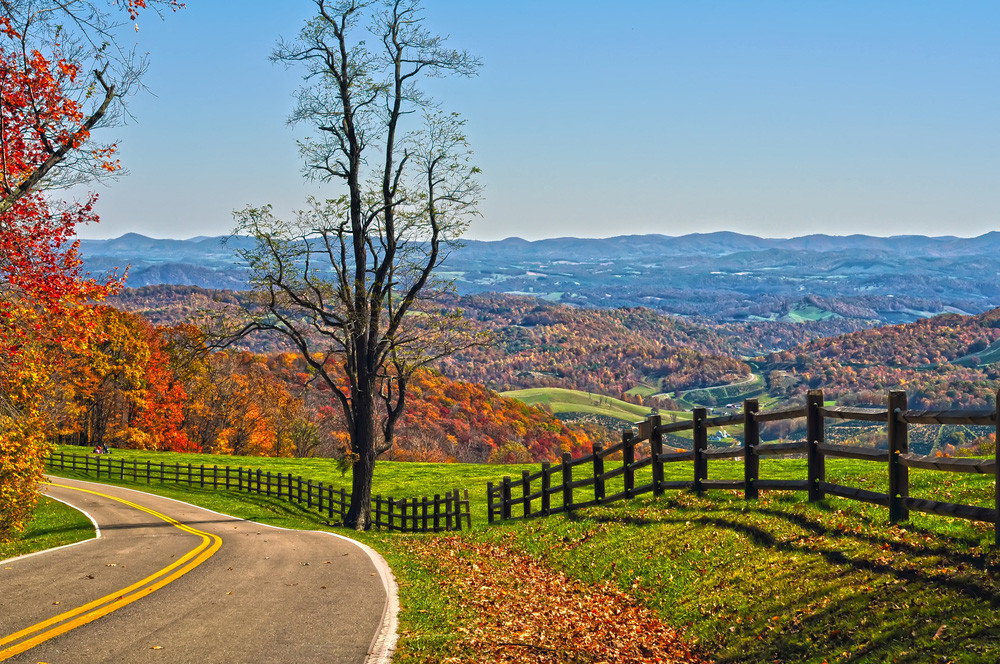 The lovely ridges and knobs of the Blue Ridge Mountains put on a heck of a fall-color performance in Virginia. A drive along the Blue Ridge Parkway or a mountaintop ramble in Shenandoah National Park provides sublime overviews of the vast palette created by vibrant oaks, hickories, red maples, dogwoods, and other deciduous trees and shrubs.

October is prime time in the Virginia Blue Ridge for leaf-peeping, the show beginning early in the month at the highest elevations and wrapping up weeks later down low.

The Beaver State is crazy-diverse, and even though this is a land mostly of conifer forest and semi-arid steppe, there’s rich leaf-peeping to be had: from the rivers of the Coast Range to the larch stands of the Blue Mountains. The Columbia Gorge (shared on its north side with Washington) is one of the preeminent places to take in the Cascade Range’s show, with bigleaf maples, vine maples, Oregon ash, cottonwoods, and other deciduous species adding a striking, mostly yellow hue to the deep evergreen—with a multitude of waterfalls and brooding cliffs adding to the visual punch. Early to mid-October is typically your best bet for seeing Gorge fall colors at their most intense. 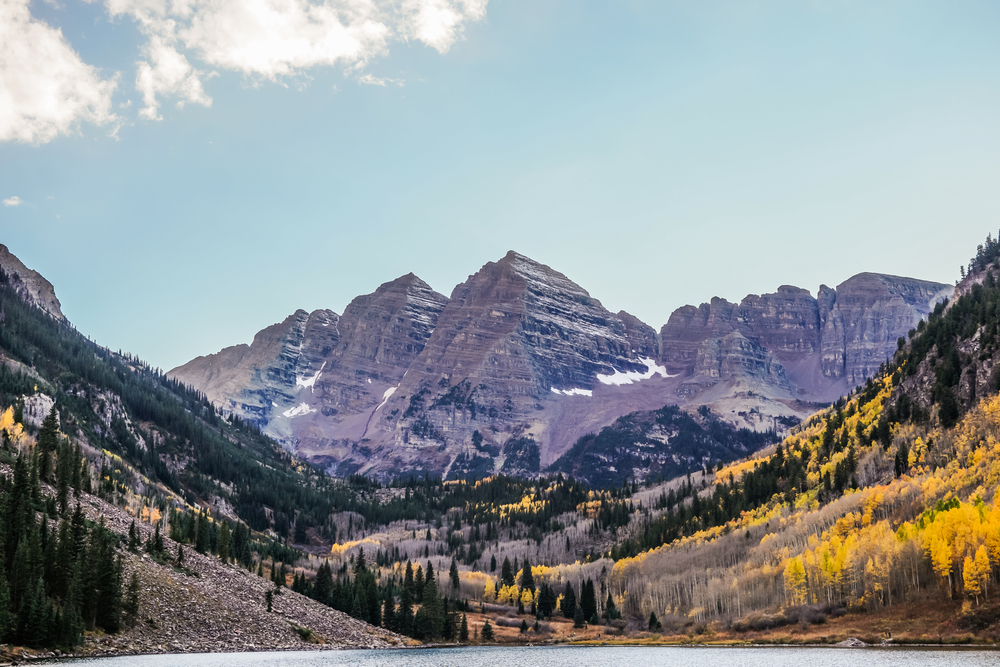 The Southern Rocky Mountains of Colorado can most definitely compete with the fall colors of New England and the Blue Ridge: Seemingly endless aspen forests in their golden guise, backdropped by grand alpine peaks, produce some of the nation’s most piercingly gorgeous scenery. There are any number of great places to enjoy the autumn glories, but Aspen’s one of the best jumping-off points. Heck, it’s called Aspen, and it’s got the sublime fall colors of the Elk Mountains (which include the famous Maroon Bells) and the Sawatch Range (host to the three highest peaks in Colorado, topped by 14,433-foot Mount Elbert) as its backyard. The show usually reaches its zenith between mid-September and the very beginning of October. 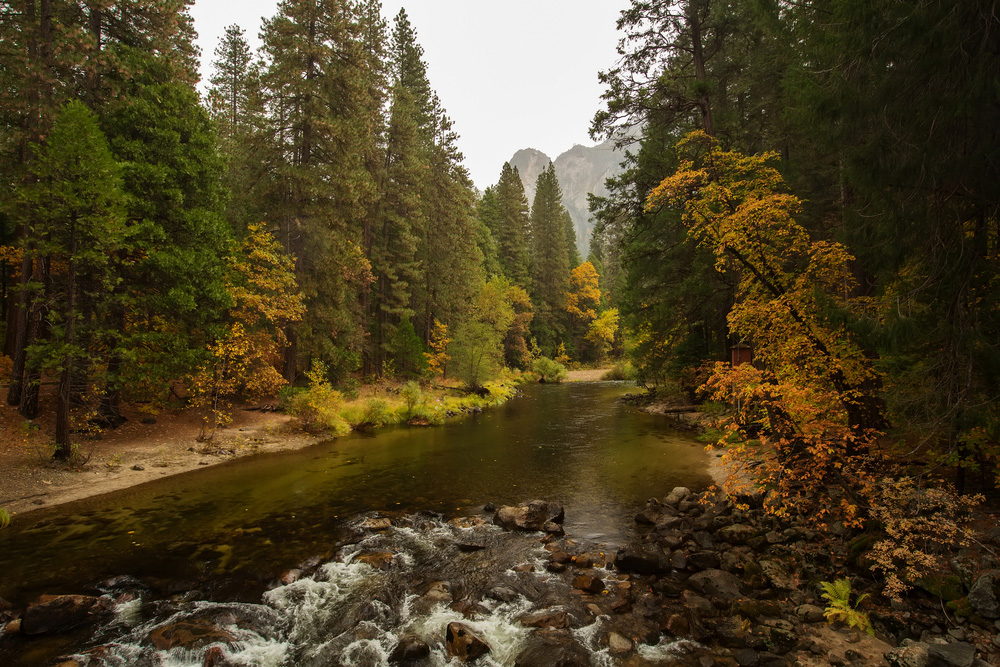 The Southern Appalachians of North Carolina—which, of course, include part of the Great Smokies—are another fabulous leaf-peeping playground. There’s a staggering diversity of trees and shrubs—and thus a wealth of different fall colors—and the East’s most impressive elevational gradient, which makes for a long fall-foliage season. Unforgettable front-row seats to the spectacle await you in the Linville Gorge, the “Grand Canyon of the Southeast”; hiking to the crest of the roughly 4,000-foot Hawksbill Mountain gives you a whopper of a leaf-peeping vantage. You should have plenty to goggle over for most of October. 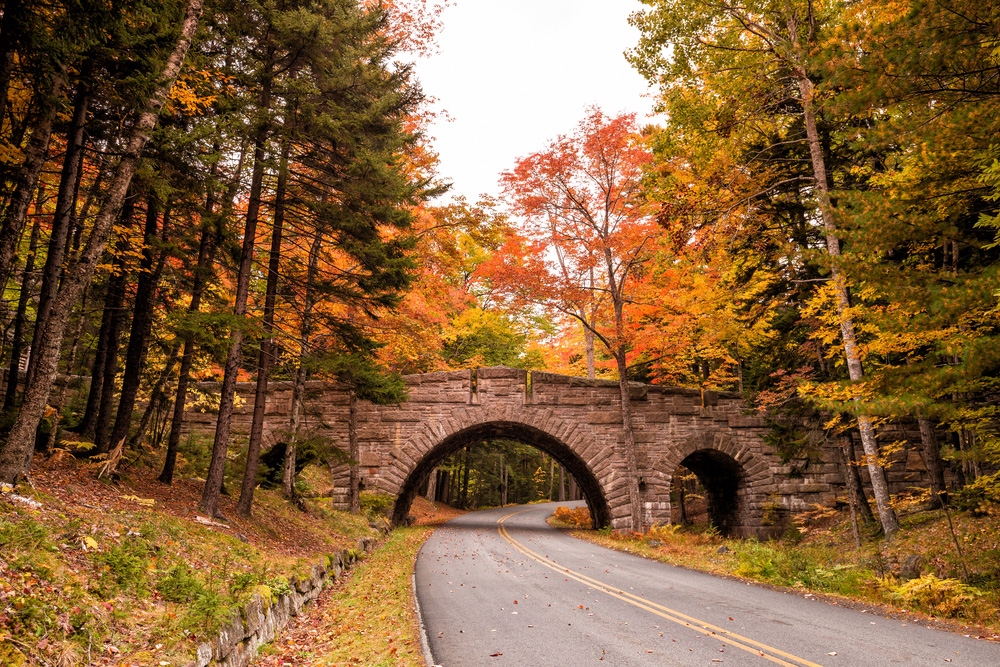 Among the best leaf-peeping spots on the East Coast, Acadia National Park sets the fiery colors of its birches, maples, and other hardwoods against a backdrop of rocky outcrops and the Atlantic Ocean. Drive the park loop, soak up the multicolored vistas from Cadillac Mountain (the highest summit on the immediate Atlantic Seaboard in the U.S.), and hike or kayak for leaf-peeping away from the blacktop. The Acadia fall colors usually swell to their peak around mid-October. 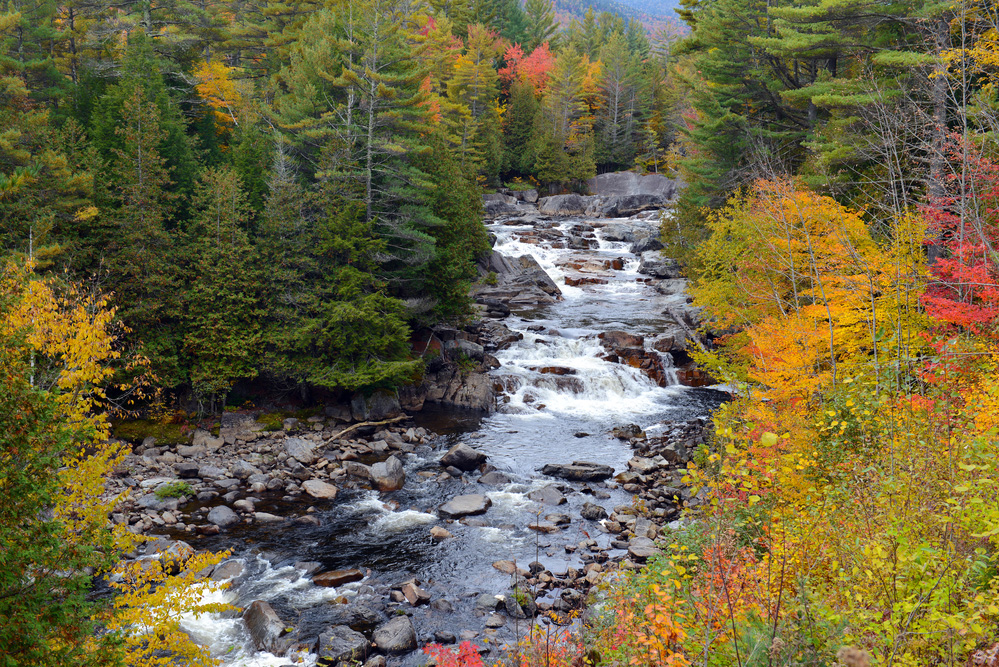 Lake Placid’s shimmery sprawl amid the bold summits of New York’s Adirondack Mountains ranks as absolutely top-tier New England scenery. And when the hardwoods woven into the Adirondack forests catch autumnal fire, that scenery gets ramped up to dreamy levels. Whether you’re kicking back along the lakeshore (or paddling out on the Placid waters), or hiking into the Adirondack High Peaks, prepare to be dazzled—especially in the closing weeks of September.

The Pleasures of a Leaf-peeping Odyssey

If you’re a fan of fall foliage—and aren’t we just about all?—the above destinations are all certainly bucket-list material. Then again, if you can’t hit ‘em all up, we’re a bit biased toward the autumnal grandeur of the Great Smokies: a temperate-forest paradise that pulls out all the stops in the fall!

See when the leaves are predicted to change in your area here. 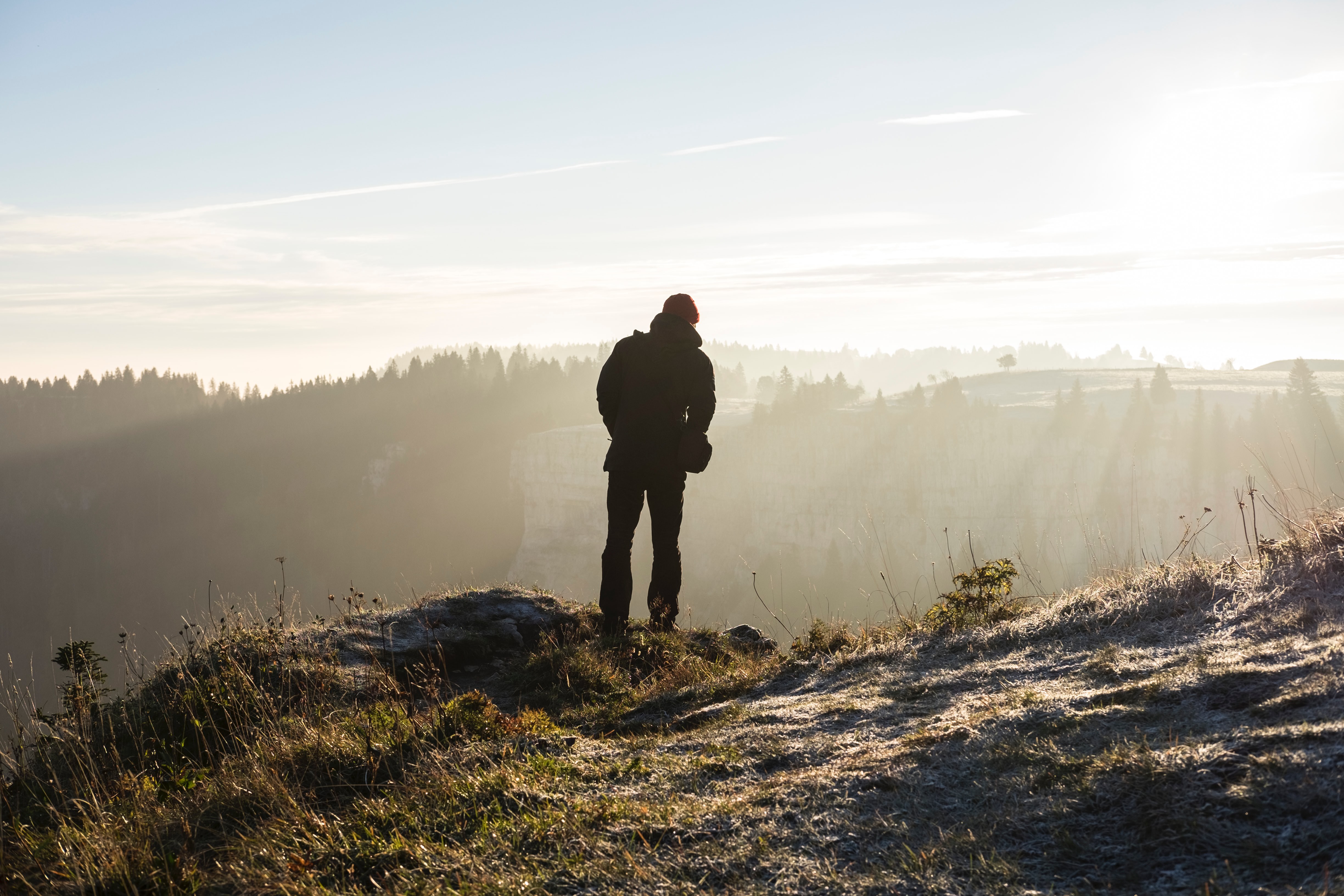 National Park Blog
Smoky Mountain Grocery Stores – Where to Stock Up When Visiting the Area
By Jasmin Diaz on June 6th, 2022 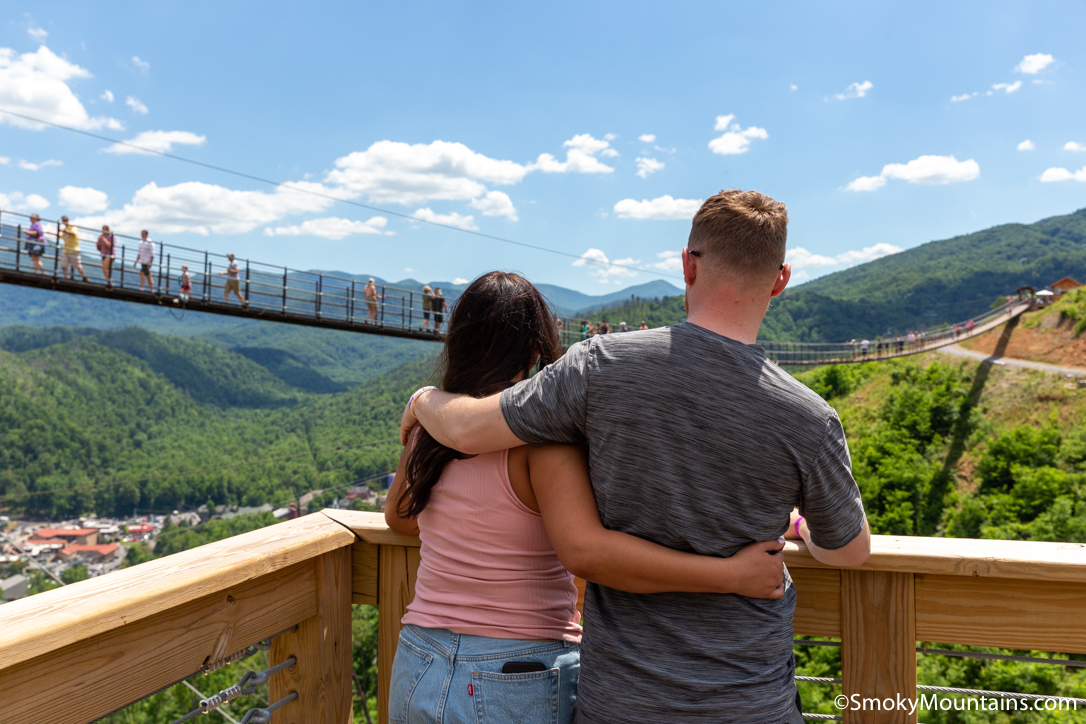 National Park Blog
By Jasmin Diaz on January 4th, 2023
The Ultimate Guide to Elevation And Altitude Sickness in the Smoky Mountains