Site Navigation
#55 of 112 Asheville Things To Do

You don't have to be Catholic to appreciate a tour of Basilica of Saint Lawrence, Deacon and Martyr. The name may be tough to remember, but you'll never forget the incredible architecture of this wonderful historic building.

There are approximately 37 million churches in the world. Of those, 1,761 are basilicas – four major and 1,757 minor. The designation “Basilica” is given to a Catholic church by the Pope due to its antiquity, historical significance, and dignity. In addition, it must have been consecrated, perform liturgical rites, enjoy active participation by parishioners, and be large enough for a liturgical celebration to be held. In other words, a gorgeous old Catholic church must be run in an exemplary manner before it is considered a basilica. That likely explains why there are only 84 basilicas in the United States.

A tour of the Basilica is free, although donations are appreciated. You can choose to tour the church with a guide, or opt for a self-guided tour. If you decide you’d like to take the self-guided tour, brochures are available in the side vestibule. Here’s some of what you’ll see:

Exterior Features
The style of the building is Spanish Renaissance, and the central figure on the facade is St. Lawrence. He’s holding a palm frond in one hand, and a gridiron – an instrument of torture – in the other. To one side of St. Lawrence is St. Stephen, the church’s first martyr. To the other side is St. Aloysius Gonzaga, who like St. Lawrence, was a native of Spain.

Over the main entrance is an arched aperture in polychrome terra cotta, showing Christ giving Peter keys and appointing him head of the church. Below this is a stained glass window that displays the Basilica of St Lawrence’s coat of arms.

It is fascinating that there is not a single beam of wood or steel in the entire structure. Rather, all walls, floors, ceilings, and pillars are made of tile or another masonry material. The roof is tile with a copper covering.

Interior Features
The vestibule is separated from the church by leather and stained glass screens. The vestibule window features Bishop Haid’s coat of arms, as well as the coat of arms of Pope St. Pius X. Bishop Haid was Leo Haid, Territorial Abbot in Belmont, North Carolina while the structure was being built. Pope St. Pius X was head of the Roman Catholic Church as the same time.

The moment you step into the church proper, you can’t help but notice the wonder of the dome, a clear span of 58 x 82 feet. The wall niches hold statues of St. Cecilia, St. Peter, St. Rose of Lima, and St. Patrick, each carved at the Daprato Statuary Company in Italy.

Above the main alter is a crucifixion tableaux, a fine example of Spanish wood carving. It shows Mary, Jesus, and St. John at the crucifixion. The apse wall above the alter features the archangels Raphael and Michael. To the left of Michael are evangelists Matthew and Mark, and to the right of Raphael are Luke and John. At more than seven feet high, the figures are impressive.

To the left of the main alter you will see a white marble statue that depicts Our Lady of Assumption. There are more niches, these containing statues of Ss. Margaret, Lucia, Cecilia, Catherine of Alexandria, Barbara, Agnes, Agatha, and Rose of Lima.

There’s also a large stained glass window showing St. Mary of the Sea, and an ornately carved door to the sacristy, dominated by the theme of the Good Shepard. Above the same door is a painting of the Visitation from the 17th century, believed to be by Massimo Stanzione (1585-1656).

There are many more frescos, carvings, statues, and tiled work -– far too fine to adequately describe. There is a timelessness to Basilica of Saint Lawrence that will capture you. It’s as though the architects and artists involved in its creation are still alive, at least through their work.

The majesty of the place is done an injustice by being described on paper. It truly needs to be witnessed in person to be fully appreciated.

Insider Tips:
– Basilica of St. Lawrence is an active church, meaning there may be a mass in progress when you visit.
– Park in one of the church parking lots and not in any of the nearby lots. Visiting a church or not, you may still be towed if you park somewhere that is not church owned. 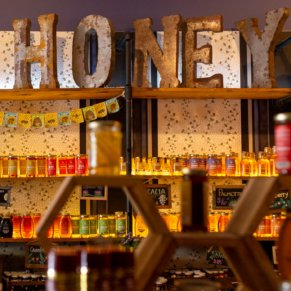