If you're after stellar views, springtime flowers, and a challenging hike, it doesn't get much better than this 2.2-mile route up Mt. Pisgah. While it starts on flat terrain, the hike is strenuous to challenging in its ascent. For this reason, Mt. Pisgah is recommended for experienced hikers only.

At 5,721 feet, Mount Pisgah is clearly visible from downtown Asheville. The transmission tower on top is one of the city’s most iconic sights. A 2.2-mile round trip hike up Mt. Pisgah brings you through pockets of mountain laurel, rhododendron, and rosebay up close to the transmission tower, where you’ll enjoy 360 degree views. You’ll gain 750 feet on this hike, which is one of the more popular routes near Asheville.

Buck Spring Tunnel
The trail starts just below 5,000 feet, on Little Pisgah Mountain. From the starting point, which is behind the Mt. Pisgah information board in the Pisgah National Forest, the flat trail passes though thickets of rosebay, mountain laurel, and Catawba rhododendron. From spring to summer, the shrubs are bursting with colorful blooms, so we recommend visiting during this time to appreciate the flowers. You’ll cross over the Blue Ridge Parkway at Buck Spring Tunnel. This initial part of the hike is fairly flat, although the trail is rocky. If you’re looking for an easy day hike off the Blue Ridge Parkway, you might complete this initial part of the Mt. Pisgah hike, then turn back before the sharp ascent.

Rocky Staircase
Shortly after you cross over the Buck Spring Tunnel, Little Pisgah Mountains meets Mount Pisgah. Here, you’ll begin a 521-foot ascent to the observation towel, proceeding along several switchbacks as you progress uphill. You’ll be climbing up a rocky staircase through forests of hardwood and mountain laurel. Some of the hardwoods you’ll see include oaks, maples, beeches, birches, and spruce. The part of the trail features several log steps as well. At the 1.1. mile marker, just before the trail veers to the right, you’ll be able to spot the tower on Frying Pan Mountain.

Once you’re finished taking in the stunning views, it’s time to turn back. Since this is an out and back trail, start down the steps you just climbed to return to the parking lot.

The Mt. Pisgah trail connects to several other trails in the Pisgah National Forest region. If you’re looking to add mileage, several good options include the Buck Spring Trail, the Pilot Rock Trail, the Laurel Mountain Trail, and the Little Pisgah Ridge Trail. For longer treks, both the Shut-in and Mountains-to-Sea trails are good options. 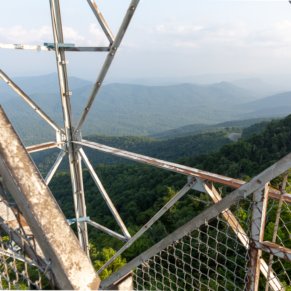