You may huff and puff a little, but the path up Hawksbill Mountain offers an excellent reward-to-sweat ratio given how short it is and how astounding the summit views are. You won’t soon forget Hawksbill’s vista, which encompasses the mighty Linville Gorge below and an all-star lineup of skyline Blue Ridge peaks, including the tallest mountain in the East.

One of the great views in all of the Southern Appalachians awaits you from the craggy crown of 4,009-foot Hawksbill Mountain, and the hike up there is just a short (if strenuous) one. Hawksbill looms along the eastern wall of the Linville Gorge, among the most impressive river canyons in the East and the centerpiece of the Linville Gorge Wilderness (which includes this summit in its awesome roadless acreage).

Hawksbill’s sharp, slanted silhouette makes one of the distinctive landmarks seen from the popular Wiseman’s View overlook on the other side of the Gorge, and it’s well worth experiencing this peak’s own mountaintop panorama for another perspective on the canyon and its framing highlands. It’s a 1.5 mile roundtrip hike there and back involving on the order of 700 feet of elevation gain.

Set off from the trailhead along gravel Forest Road 210 (Table Rock Road) in the Pisgah National Forest. You’ll soon start climbing through pretty hardwood forest. At roughly the half-mile mark, the trail makes a sharp left just a little ways before the junction with the Jonas Ridge Trail. The final ascent through rocky rhododendron and laurel slicks steepens, but before you know it you’ll be gaining the mountain crest and coming to a T split.

Go left for a fine prospect of nearby Table Rock and Shortoff mountains (other defining Linville Gorge headlands) to the south; turn right, meantime, for the real showstopper view from an expansive outcrop.

You’ll be treated to a turkey vulture’s perspective of the yawning canyon (including Linville Falls) a few thousand feet below as well as a whole mess of lovely ridges and summits, including Calloway Peak on Grandfather Mountain to the north (topping the Blue Ridge) and humps of the Roan Highlands and other Unaka ranges to the northwest. To the southwest rises the loftiest crest in the Appalachians, the Black Mountains: Celo Knob, Winter Star Mountain, Cattail Peak, and king of them all Mount Mitchell, at 6,699 feet the highest summit in the eastern U.S. Eastward, the country falls away to the lowlands of the Piedmont.

Hopefully it goes without saying, but exercise caution around the cliffy drop-offs along the Hawksbill Mountain viewpoints: no guardrails here! 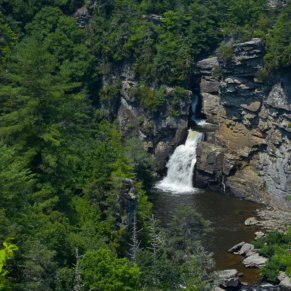 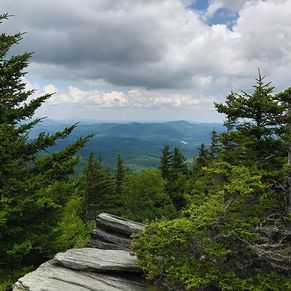