A taproom selection of classic ales and adventurous lagers makes Twin Leaf Brewery a worthy destination for beer lovers in the Asheville area. However, a general lack of cuisine could leave you disappointed if you prefer to combine your favorite brews with appetizers. Come for the beer, and stay for the atmosphere.

Serving a variety of house and guest brews, Twin Leaf Brewery brings a pleasant vibe to the Asheville craft beer scene. The brewery offers a regularly rotating selection of taps, with something to satisfy every type of beer enthusiast. While some of the available beverages are decidedly adventurous, visitors can also count on finding classic American, Belgian, and English-style ales.

The genius behind Twin Leaf Brewery is Tim Weber, who began experimenting with home brewing as he studied engineering over a decade ago. At the time, he also worked as a microbiology lab tech. He quickly developed a passion for fermentation and dedicated every spare moment to his newfound obsession. After he graduated from the American Brewer’s Guild, Weber moved to Asheville.

A large warehouse-style brewery, Twin Leaf offers ample seating both inside and on its patio. This includes picnic tables, stools by the bar, and smaller, more traditional tables.

Both dog and kid-friendly, Twin Leaf Brewery has a welcoming atmosphere and plenty of games to keep younger visitors entertained — the Jumbo Jenga is a perennial favorite for all ages. The location is just sophisticated enough to be a viable spot for date night, but don’t be surprised if you find yourself surrounded by families and their four-legged friends.

If you show up when it’s not busy, feel free to chat at length with the staff about beer or local outdoor adventures. The brewery’s dedicated employees are equally enthusiastic about both topics and will happily steer you in the right direction if you’re from out of town.

Weber and his employees are also passionate about conservation. They seek to do their part for Mother Nature by utilizing wind power and a variety of energy-saving devices. They plan to install rooftop solar panels in the near future.

As is the case in many local breweries, Twin Leaf Brewery regularly switches up its beers on tap. That being said, a few favorites tend to pop up again and again.

The following are a few of or favorite beers (and ciders) on tap:

Rosemary IPA
Featuring organic rosemary from Rayburn Farms, this IPA is brewed with Simcoe, Sorachi, and Amarillo hops. It is particularly popular as a holiday beer.

Flying Milligan
It’s not too often you can refer to a brew as downright inspiring, but that’s certainly the case for the Flying Milligan. Brewed in honor of a friend of the staff who sustained severe injuries in a hiking accident, the IPA was initially developed as a benefit. An impressive twelve pounds of hops per barrel help this brew stand out.

Chocolate Chip Pumpkin Milk Stout
Combine the best of the pumpkin spice craze with a classic love of chocolate, and you have a beer that even skeptics can enjoy. Over 400 pounds of roasted pumpkin from Rayburn Farms was added to this batch, along with cocoa nibs, chocolate malts, and lactose sugar.

Sweet English
Do you prefer hard cider to beer? No worries — Twin Leaf has you covered. Originating from Urban Orchard Cidery, this delectable guest tap is sweetened with a little help from fresh-pressed juice. 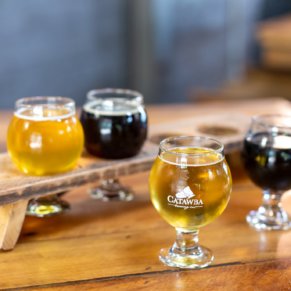 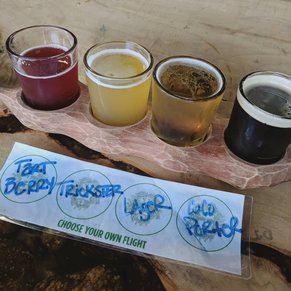 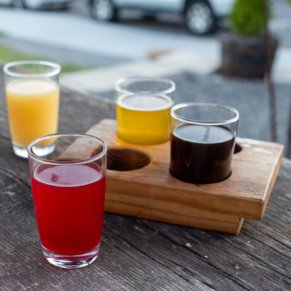