In many ways Sierra Nevada Brewery, located on lushly-landscaped grounds near the Asheville airport, is as good as a destination resort. Both self-directed and guided tours offer a comprehensive view of the grounds and brewing facility -- complete with samples -- but the fun is in the outdoor beer garden. There is often live music and entertainment, and 23 different taps! Indoors, a cozy atmosphere characterizes the huge 400-seat restaurant that features a popular tapas menu as well as more traditional fare among its farm-to-table offerings.

Although Sierra Nevada Brewery’s first beer was brewed in Chico, Calif., in 1980, ground was broken in 2012 for the Eastern brewery in Asheville in 2012. Located at 100 Sierra Nevada Parkway in Mills River, NC, the brewery has a huge restaurant/taproom and expansive landscaped grounds.

It is one of the largest craft breweries in Asheville, a city renowned for its love of brewpubs and craft beers. Sierra Nevada secures its position as one of the local favorites with a full schedule of special events and quality brews. There’s a rollicking Beer Camp in June, described as “an epic adult day camp” with games, keg bowling, a climbing wall, plenty of brew samples and abundant food for all participants!

In the fall, the brewery celebrates Oktoberfest in style, complete with a special brew, German food and a souvenir stein for all ticketed celebrants. Most weekends, free music is featured on the Amphitheater Stage at the Mills River Taproom.

However, it’s the tours and the relaxed atmosphere of the Taproom with the draw of an experimental 20-barrel brewhouse — as well as the tapas menu and distinctive farm-to-table fresh food at the restaurant — that draw throngs of visitors daily throughout the year.

Sample the brewery’s distinctive brews on a variety of guided tours — including a two-hour nature hike through the woods that’s open to participants from age 12, and another unique Doughnut and Beer Pairing — or just stroll through the brewery’s visitor corridor on your own on the way to nearby indoor and outdoor eating areas. Tours are popular, and online advance reservations are recommended.

This is a large facility, located near the airport and the WNC Agriculture Center south of Asheville, so there’s little need to worry about traffic. The brewery and restaurant are closed only on select holidays.

These are our favorites from the menu, but you’ll surely find others:

Duck Fat Fries
If you’ve never had duck fat fries before, you’re in for a taste treat. But if you’re searching for the best in the country, these are definite contenders. These triple-fried, perfectly-cut potatoes are so good that you might want to get two orders for a table of four. The bonus is in the toppings: the combination of pulled duck and cheese, mustard and pale ale raspberry ketchup is totally special!

Hoppin’ John
If you’re a proper Southerner, you’ll know the name and the special flavor. If not, be prepared to rave about this combination of rice, Sea Island red peas, bacon and hop-infused tomato jam.

Shrimp and Grits
Another classic, these cheesy grits have all the right flavors, including fresh rosemary; the New Orleans style barbecue shrimp are especially good. You can also order cheesy grits as a side to pair with any other menu item.

Trout Almondine Salad
Yes, there is a healthy salad option that can hold its own alongside your distinctive craft brew choice. We love this fresh option because it’s, well, fresh! And the trout is a nice addition!

Draught-Style Pale Ale
For a lot of reasons, this is our go-to selection, but we also can be easily talked into sampling one of the imaginative beer flights at the Taproom. For a bit of the exotic, we’ve been delighted by the Margarita-like taste of Otra Vez Gose with Lime and Agave.

Dark Chocolate Panna Cotta
If you saved room for dessert, this one will satisfy your urge for something sweet, and for something chocolate, with a layering of flavors that’s just right!

The Sierra Nevada Brewery is a place you’ll want to visit more than once. Its beautiful surroundings are reminiscent of the magnetism of the mountains, along with an Asheville ambience that’s hard to resist.

Insider Tip
-If you’re looking for quirky souvenirs, don’t leave without a few free posters of the brewery’s craft beers. They’re available as you leave the tour area and are perfect for decorating a “man cave.” 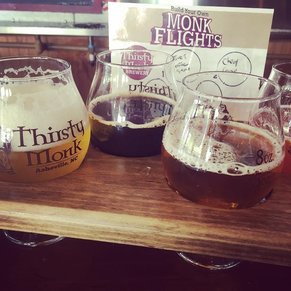