Head underground to visit the dank and mysterious headquarters of One World Brewing. This hidden Asheville hotspot features 20 taps between its two locations in downtown and West Asheville.

If you’re searching one of Asheville’s most underground breweries, stop by One World Brewing. It’s literally underground! This establishment resides in the basement of a downtown building, providing a dim-light and cozy vibe that will make you feel like you’re in a secret club.

While they’ve had some hiccups along the way thanks to vandals, One World Brewing is nearly ready to open their second location in West Asheville in a previously vacant garage building. The new location will have a modern feel, an outdoor area, and a brewing area in the basement that will provide the beers on tap there.

As for the current location, it has an allure that will make the experience worthwhile, even if you’re not a drinker. Even before you get in the building, you’ll feel enchanted, as you’ve got to head down a small alley. The large, rounded front door looks more like it belongs in Hobbiton than downtown Asheville. After going down the stairs, take a seat at one of the wooden tables that perch on the concrete floor, or opt for a seat at the bar with its pendant lighting. With your beer in hand, head over to the gaming area to try your hand at darts or Sjoelbak shuffleboard.

One World hosts regular live music a few days every week, as well as movies and trivia, so it might not be the best place for a quiet beer with friends. However, it’s definitely the place to be if you want to experience Asheville’s unique culture.

Between the two locations, they offer a total of 20 taps of fresh, small-batch beer, 11.5 barrels, and 26 fermenters, meaning you’ll never run out of options to try here. They work on all styles of beer, meaning everyone can find just what they like to drink while they’re here.

A few of our menu favorite at beers at One World Brewing include:

Inner Thigh IPA
Arguably one of One World’s most popular beers, this brew comes and goes on tap, so be on the lookout for it. Brewed with Centennial and Cascade hops, Inner Thigh is refreshing, light, and smooth as it goes down the hatch.

Chocolate Truffle Stout
Chocolate and beer in one? There’s no way we couldn’t rank this among our favorite beers here! This stout offers roasted malt and chocolate flavor (despite not actually having any cocoa in it). You’ll love the dry, decadent taste.

Saison of Love
Craving the light and sweet taste of a Belgian farmhouse ale? Look no further than Saison of Love. It has hints of citrus and coriander for a spicy yet delicate touch on the palate. The hop tastes derive from Hallertau Blanc and Motueka for a highly drinkable brew.

Citra Bomb IPA
The Citra Bomb IPA provides all the citrus taste you’re yearning for, plus some. It’s made from the hop of the same name to create a taste that’s not bitter like some IPAs. Enjoy the flavors of grapefruit, lemon peel, and peach as you down one (or more) of these beers.

Insider Tips
-There’s no elevator, so those who can’t tackle the stairs won’t be able to visit. If you do make it down, don’t walk past the curtained area when you’re preparing to leave, as you’ll completely miss the exit.
-Take note that brewery sometimes has a moldy or dank smell (it is in a basement after all), so make sure your nose is ready. 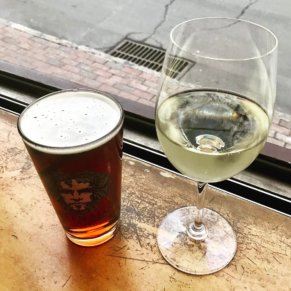