Mountaintop Lodge is a crowd-pleaser—and not merely because it can sleep as many as thirty-four people. The eight-bedroom, seven-bath log home is packed with luxuries, including two outdoor hot tubs and two indoor jetted tubs. Add to that views of the Smoky Mountains and a location in Starr Crest II Resort that’s close to top attractions but removed from the hubbub, and you have an ideal home away from home.

Mountaintop Lodge’s eight bedrooms are spread out among its three floors. Each bedroom has a log-style king-size bed and a flat-screen TV, and four of them—two on the loft level and two on the main floor—are full-on suites with their own private bathroom. The two main floor suites are especially deluxe, as each has a jetted tub in its bathroom. What’s more, one of these suites also has its own fireplace and doors that open directly onto a deck. Accommodations don’t get much more pampering that this.

In addition to the bedrooms, a sleeping area in the loft is furnished with three sets of queen-sized beds and a queen-size futon, so that another fourteen people can sleep here. If there are a number of kids in your group, you could have them all camp out here; space even has its own bathroom and TV.

Have even more guests? The downstairs game room can sleep four people: two on a queen-size sofa bed and two more on a futon. Sleeping in the game room is no hardship. The spacious gathering spot also boasts a pool table, an arcade table with more than sixty games, foosball, a TV, and a wet bar with a microwave. Who wouldn’t want to sleep here? This level is also home to the remaining four bedrooms and two bathrooms.

The open-plan living/dining/kitchen area is on the main floor. Comfortable seating and a stacked-stone fireplace make this an especially inviting space, as does the plasma TV with surround sound. The large farmhouse-style dining table can double as a game table or even as a workspace (Mountaintop Lodge has free WiFi). And the kitchen is prepared to cater for a crowd; it includes two stainless-steel refrigerator/freezers in addition to a full complement of other appliances.

The three rear decks, which span the width of the home, are as well outfitted as the interior of the Mountaintop Lodge. The bottom deck hosts two large hot tubs so that everyone can savor a restorative soak while watching falcons and eagles soar over Mount LeConte. The other decks include a porch swing, a picnic table for alfresco dining, and of course, plenty of rocking chairs (it wouldn’t be a Smoky Mountain cabin without them).

Because Mountaintop Lodge is located in Starr Crest II Resort, if you stay in the summer you’ll have free access to the resort’s outdoor pool. And year-round you can take advantage of the resort’s playground and covered picnic area.

The resort is less than fifteen minutes from Dollywood; in fact, from Mountaintop Lodge’s deck, you may be able to hear the whistle of the theme park’s train. Even closer is the Pigeon Forge Parkway, home to the Titanic Museum, Dixie Stampede, WonderWorks, a huge outlet mall, and a plethora of restaurants, dinner theaters, and shops. In twenty minutes, you can drive to downtown Gatlinburg, which has its own wealth of attractions, including the Guinness World Records Adventure, an aquarium, and a tram that carries you over the town to Ober Gatlinburg Amusement Park and Ski Area. Even the Great Smoky Mountains National Park is less than a half-hour away.

When looking for a rental that can accommodate a crowd, sometimes you have to sacrifice convenience or comfort. That’s definitely not the case with Mountaintop Lodge. Its luxuries, amenities, beautiful vistas, and prime location ensure that everyone in your group, whether that’s four people or thirty-four, will enjoy a getaway that they’ll long cherish.

You won’t be charged yet.
Nearby Cabins 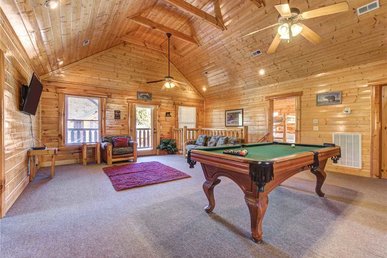 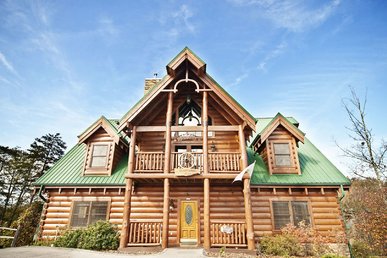 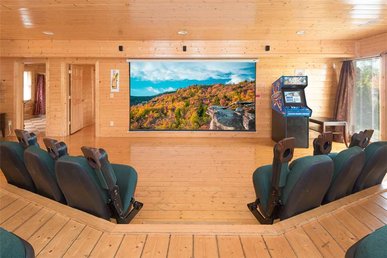 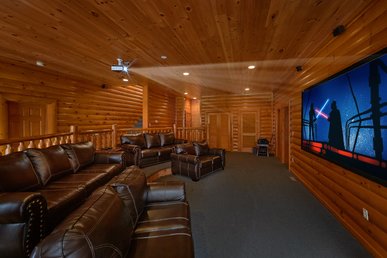