The Rich Mountain Loop offers a tranquil escape from the high-traffic drive through world-famous Cades Cove. It’s exciting to reach the timeworn landmark of the John Oliver Cabin by foot, and typically easy to find solitude higher up on Rich Mountain. While strenuous, this 8.5 mile hike is rewarding.

Explore the quiet area of busy Cades Cove on the Rich Mountain Loop. This trail, which is known for its wildflowers, valley views, and a few intriguing historical landmarks forms part of the north rim of the the Great Smoky Mountains National Park’s best-known attraction – Cades Cove.

You can take this 8.5-mile loop in either direction. We’ll profile it as a clockwise jaunt. With some 1,700 feet of elevation gain, it’s a moderate half-day hike.

Trail Description:
Not far down the Rich Mountain Loop Trail, you’ll cross Crooked Arm Branch of Abrams Creek. Past this, the trail forks: Again, you can go either way here, but as we’re describing the clockwise route it’s the left (aka westward) option you’re taking in this scenario.

This brings you along the southern toeslopes of Rich Mountain, crossing a couple of streams draining down into Cades Cove: first a tributary of the Crooked Arm, then Harrison Branch. Rounding the base of Leading Ridge, you’ll come to one of Great Smoky Mountains National Park’s oldest human structures: the John Oliver Cabin, built around 1820 by the War of 1812 veteran and one of the pioneering Cades Cove settlers.

Past the cabin—not quite 1.5 miles from the trailhead—you’ll swing north up Marthas Branch, beginning the actual climb up Rich Mountain via this canyon. You’ll cross this creek (named for John Oliver’s daughter, incidentally) a number of times during your hike up. Some three miles in as you near the junction with the Indian Grave Gap Trail, you’ll have a prospect of Cades Cove to the south from Cave Ridge.

You’ll turn right on the Indian Grave Gap Trail and continue climbing Rich Mountain’s shoulders. A little past the turnoff for the Rich Mountain Trail (which heads north from your loop), you’ll reach a spur path on the left leading to the mountain’s actual summit: Cerulean Knob, just shy of 3,700 feet. A fire tower once stood here—only its foundation remains—and its old clearing makes a nice rest/meal stop. The views aren’t super-impressive, though better during winter.

Resuming your course along the Indian Grave Gap Trail, you’ll hit the triple junction with the Scott Mountain and Crooked Arm Ridge trails (some six miles from the trailhead). Hang a right onto the latter to complete your loop, which involves a fairly steep descent down Rich Mountain’s slopes via the Crooked Branch drainage. Just a short ways north of the Crooked Arm Ridge/Rich Mountain Loop junction nearly at your hike’s end, the Crooked Arm Branch tumbles down a 25-foot cascade.

Once you hit the Rich Mountain Loop Trail again, you’ll just retrace a half-mile of your steps back to the trailhead.

Directions to the Trailhead:
From Gatlinburg, take the Parkway to the National Park. Immediately after the Sugarland Visitor Center (on your right), make a right on Little River Road. Stay on this scenic road for about 25 miles of winding, beautiful roads. You will want to find the parking lot on the left side of the road just before the one-way Cades Cove Loop Road begins. The trailhead’s on the opposite (north) side of the road just past the Cades Cove Loop gates.

Insider’s Tips:
-The Rich Mountain Loop is renowned for its wildflower displays: violets, azaleas, mountain laurel, and more.
-If you’re looking for maximum views, consider an “off-season” Rich Mountain hike in winter. The leafless deciduous stands provide longer sightlines from the ridgecrest toward Dry Valley in the north and Cades Cove in the south.
-Keep an eye out for white-tailed deer, especially along the southern leg of the Rich Mountain Loop: Whitetails often graze the fields this part of the trail skirts.
-Heading up Marthas Branch above the John Oliver Cabin, watch for an old chimney in the woods near the trail: another relic of early homesteading. 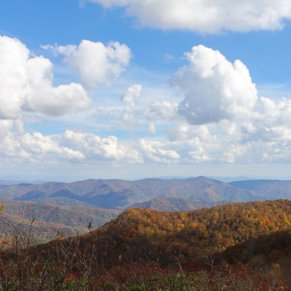