Nab one of the best views in the Great Smoky Mountains region via the Look Rock Tower Trail, a short, easy, all-ages, and (for the most part) all-season walk right off the Foothills Parkway. Rarely crowded, this is a must-see, stretch-your-legs vantage that provides an unforgettable panorama taking in the Great Smokies themselves as well as far out over the Tennessee Valley.

Knobbing up from the long ridge of Chilhowee Mountain, Look Rock is a highlight of the wonderful Foothills Parkway that runs along the northwestern margin of the Great Smoky Mountains. Indeed, it’s not just a highlight but the high point of the Parkway, rising as it does to 2,652 feet. The concrete observation tower atop Look Rock, needless to say, provides a truly outstanding view of the surrounding country—well worth a stop for anybody visiting the Great Smokies, and reachable by everyone from very young children to older folks.

The tower’s awesomeness as a vantage—one of the best in Tennessee, we’d assert—comes partly because of Look Rock’s high ground, and partly because of the more general prominence of the Chilhowee Mountain ridge. It’s one of several narrow foothill crests paralleling the Great Smoky Mountains on their north side, serving as a segue between the heights of this great range and the lowlands of the Tennessee Valley.

The parking area for the Look Rock Trail along the Foothills Parkway delivers its own impressive views, but they’re just the prelude. Cross the Parkway on the designated crosswalk to reach the trailhead.

The total round-trip distance of the Look Rock Trail is just shy of a mile, and it’s paved the whole way. The path gains a little elevation (a bit less than 200 feet) but does so gently enough. In short, most people will find this a pretty easy mosey, and the kindly grade and pavement mean it’s doable even for strollers.

But don’t rush your visit: You’ll want to linger at Look Rock, so give yourself at least an hour here.

The top room of the tower, which supports meteorological equipment, is closed to the public, but that’s OK: The vistas from its observation platform are stunning. It’s quite the panorama, to put it mildly: stretching from the high crest of the Great Smokies out across the Tennessee Valley to the uplands of the Cumberland Plateau beyond. Clear-day views extend more than 50 miles.

This is one of the best “zoomed-out” looks you’ll get of the Great Smokies, given the slight remove and elevated vantage provided by Look Rock. You’ve got good prospects of such prominent peaks as Clingmans Dome—at 6,643 feet the highest in the Great Smokies and one of the highest in the eastern U.S.—as well as 6,593-foot Mount LeConte, widely regarded as the most topographically prominent summit in the East. You can see Gregory Bald and Thunderhead Mountain looming along the main Smoky Mountain divide, plus Rich Mountain rising above Cades Cove. The looks out over the lowlands to the north are also amazing, if less dramatic.

Look Rock Tower’s accessible all-year-round for the most part, except for periodic spells when bad winter weather closes the Foothills Parkway. It’s wonderful, in fact, to see this grand panorama in all of its seasonal guises. If you only come here once, though, you really ought to consider timing it for the autumn: The fall colors from this prominent vantage are outstanding.

Any time of year, meanwhile, Look Rock Tower is also a fine place to take in the sunset, given its orientation; the evening light on the flanks of the Great Smoky Mountains is especially enthralling.

What’s extra-great about Look Rock is that, despite its accessibility and the caliber of its views, it’s on the quieter side as far as Great Smoky Mountains-area destinations go. That’s true of the Foothills Parkway in general, really. You may well be sharing the path and the tower, particularly in summer and fall, but they’re unlikely to be thronged. If you’re here during the “off-season,” you may well have this epic panorama to yourself!

Insider Tips:
-The viewing platform at Look Rock Tower can be a windy place indeed, and given the low railing it’s good to exercise caution during these conditions—and anytime you’re here with small children.
-While the Look Rock Tower Trail’s a great choice for families, remember that no dogs are allowed along it. 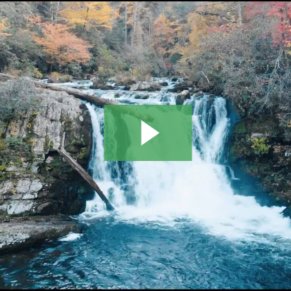