Given the "Road to Nowhere" saga and the homestead relics it passes, the Goldmine Loop certainly sheds a little light on the complicated human history of Great Smoky Mountains National Park. It also delivers the novelty of walking the eerie tunnel of a dead-end road, and a glimpse of the isolated northern shores of Fontana Lake.

The Goldmine Loop Trail is an utterly unique hike near the southern border of Great Smoky Mountains National Park not far west of Bryson City, North Carolina. It doesn’t have the richest scenery or wilderness feel, but it plays out in a historically fascinating corner of the park and includes—get this—a 1,200-foot-long tunnel.

Just a little more than three miles in length and involving about 615 feet of total elevation gain, the lightly trafficked Goldmine Loop is a fairly easy hike that nonetheless has a few steep sections. Allow yourself two or three hours, depending on your preferred hiking pace.

The hike begins at the end of Lakeview Drive, the so-called “Road to Nowhere” that strikes northwest out of Bryson City and dead-ends here amid rugged ridges tumbling down to Fontana Lake.

The government started work on this road in the 1940s after the Fontana Dam flooded Highway 288, an important access corridor for Swain County families who were displaced by the creation of Great Smoky Mountains National Park and the reservoir itself. Lakeview Drive was meant to hug the northern shores of Fontana Lake and allow uprooted residents to visit historic family cemeteries.

With only about six miles completed on Lakeshore Drive out of Bryson City, environmental concerns prompted the Department of the Interior to abandon the road project around 1970. This was a controversial decision that wasn’t settled, legally speaking, until 2010, when the federal government agreed to pay Swain County $52 million in compensation.

The kickoff to the Goldmine Loop is the Road to Nowhere’s most famous feature: the 1,200-foot portal of the Lakeview Drive Tunnel, blasted through the aptly named Tunnel Ridge. The tunnel exit is always within view—there’s always light at the end of the tunnel, in other words—but it’s definitely a dark passage. Horseback riders and hikers skittish of the tunnel experience can take the 1.6-mile Tunnel Bypass Trail.

Past the tunnel, you’ll proceed west along the Lakeshore Trail, the nearly 35-mile-long path running nearly the full length of Fontana Lake. (The 300-mile-long Benton MacKaye Trail, a long-distance footpath passing through Georgia, Tennessee, and North Carolina, follows the Lakeshore Trail through this section of the Smokies.)

The blacktop of the Road to Nowhere soon gives out. After passing the western end of the Tunnel Bypass Trail, you’ll reach the Goldmine Loop proper. The downhill hike into the Goldmine Branch drainage is steep. Keep an eye out for stone chimneys and other evidence of former homesites.

About a mile-and-a-half from the trailhead you’ll reach the spur path to Backcountry Campsite 67. This quiet site up the Hyatt Branch, set on the grounds of a former farmstead, makes a nice option for turning your Road to Nowhere-area ramble into a backpacking overnighter.

In another quarter-mile you’ll reach the shores of the Goldmine Branch inlet of Fontana Lake. Reservoir levels vary quite a bit, so sometimes the waterfront here isn’t particularly impressive. From the Fontana Lake embayment you’ll follow the Tunnel Branch a short ways and then start ascending a southerly spur of Tunnel Ridge.

Just shy of a mile or so after first reaching the cove, you’ll come to the end of the Goldmine Loop: its junction with the eastern leg of the Tunnel Bypass Trail. From here it’s a quarter-mile hike up to the Lakeview Drive trailhead.

Insider’s Tips:
– You don’t necessarily need a flashlight to walk the Lakeview Drive Tunnel, given its even pavement and the clearly visible outlet. That said, folks a bit leery of the dark might want some illumination, especially on an overcast day.
– Much of the Goldmine Loop travels through mixed hardwood forests, which means an autumn hike along it can yield some fine fall colors. 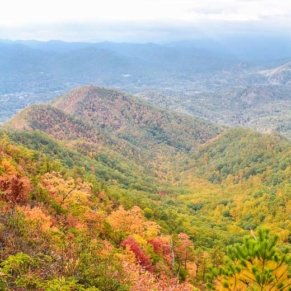