Mount LeConte via The Bullhead Trail

At 6,593 feet, Mount LeConte is among the loftiest peaks in the Great Smoky Mountains—indeed, along the entire Blue Ridge. Technically speaking it’s the third-highest summit in the Smokies after Clingmans Dome and Mount Guyot, and it’s the sixth-highest east of the Mississippi River. But LeConte’s steep rise from the valley of the Pigeon River—the crown looms 5,301 feet above Gatlinburg to the near northwest—makes its base-to-summit stature, or “prominence,” one of the most impressive in all the Appalachians.

Mount LeConte’s really a massif, a mountain block studded with multiple peaks: West Point, Cliff Top, High Top (the true summit), and Myrtle Point being the main ones west to east, with Balsam Point being a far westerly spur. Altogether, we certainly think it’s one of the preeminent hiking destinations in Great Smoky Mountains National Park.

Hikers aiming for Mount LeConte’s summit have multiple routes to choose from, but we admit to being partial to the Bullhead Trail. Quiet and removed, it’s a trek that generally supplies plenty of backcountry solitude—and plenty of those sea-of-mountains views that makes this park such a wonderland. You earn those prospects with a fairly strenuous workout, but—after all—this is Appalachian mountaineering!

The Bullhead Trail basically shares a Cherokee Orchard trailhead with a more popular footpath up Mount LeConte: the Rainbow Falls Trail, named for the standout cataract it passes. That’s a boon, because it means you can combine the two routes into a tough but rewarding loop, getting the best of both. We’ll be profiling the Bullhead in this article, but keep in mind you can make your journey up and down one of the Smokies’ most alluring mountains a double-header. (More on that later.)

To reach the trailhead from Gatlinburg, take Historic Nature Trail-Airport Road from stoplight #8 in town; follow this a little more than a half-mile to Cherokee Orchard Road, which’ll lead you into the national park. The parking area for the Rainbow Falls Trailhead is about 0.6 miles down the Cherokee Orchard Loop Road—a little more than three miles from your jumping-off point at the traffic signal.

Park at the Rainbow Falls trailhead (or, if it’s full, at a spillover lot a short ways down the road) and find the gate just before the parking-lot entrance: That’s the starting point for the Bullhead Trail, which actually begins on the Old Sugarlands Trail, a historic wagon road linking park headquarters at the Sugarlands Visitor Center with Cherokee Orchard.

In about a fourth of a mile, you’ll hang a left off the Old Sugarlands Trail and commence on the Bullhead proper. You’ll rise out of hemlock forest into the pine-oak woods flanking the western and southern slopes of the knob called the Bull Head, topped with one of those distinctive Southern Appalachians heath balds.

The Bull Head is so-named for its alleged bovine resemblance. In A Natural History of Mount LeConte, Kenneth Wise and Ronald H. Petersen note that that moniker actually seems to stem from an early nickname for Mount LeConte as a whole: In the mid-1800s, the geologist Arnold Guyot (who lends his name to the second-tallest mountain in the Smokies) was told that locals called the whole massif the Bull Head because of the silhouette of its western ridgeline.

The dry woods of the Bull Head’s flanks and the ridgeline heath gardens provide sweeping views over the Sugarlands, the verdant valley once home to many settlements. To the south, admire the long ridge of Sugarland Mountain and, beyond, the skyline hump of Clingmans Dome, the Smokies‘ 6,643-foot rooftop. To the southeast looms your next goal: conical Balsam Point.

Getting there means a gently ascending, crisscrossing ridgeline walk delivering more stirring vistas, mostly northward. Along with a Civilian Conservation Corps-built cairn called the Pulpit, a highlight of this Bull Head-Balsam Point traverse is a lengthy “rhododendron tunnel,” a delightful landscape feature that distinguishes many a Smoky Mountain ramble. The shadowy depths of this evergreen corridor make for one of the Bullhead Trail’s most enigmatic passageways.

The ridge is a lovely patchwork of vegetation communities, ranging from heath openings and dry pinewoods to deep “cove-forest” stands of eastern hemlock and mixed hardwoods; as you ascend toward Balsam Point, the forest starts transitioning to the great spruce-fir zone that hugs the high-elevation crests and summits of the Southern Appalachians.

Rounding Balsam Point’s southern slope, the trail makes a sharp switchback and then climbs to the ridgeline rising to the LeConte subpeak of West Point. Some 6.3 miles from the trailhead, you reach the junction with the Rainbow Falls Trail, which has roughly paralleled the Bullhead route to the north via LeConte Creek and Rocky Spur. From the junction, head east along the ridge to another crossroads—the Alum Cave Trail coming up from the south—and then reach the famous Mount LeConte Lodge, a cluster of primitive cabins for overnighting it on the mountaintop.

You’re not quite at Mount LeConte’s true summit, however: Hoof it a short ways farther to High Top, identified with a cairn. You’re 7.2 miles (and nearly 4,000 feet up) from the trailhead—and standing astride one of the noblest mountains along the Blue Ridge. Not bad!

You can “bag” some of the LeConte massif’s other subpeaks (see “Insider’s Tips,” below) before bedding down at the LeConte Lodge or in the LeConte Shelter just below High Top. The Bullhead is certainly doable as a long dayhike, though. If you want to make a full-day circuit with the Rainbow Falls Trail, consider doing the latter (a steeper haul) on the way up the mountain and descending via the Bullhead. Round-trip mileage for the Bullhead Trail is 14.4; doing the Bullhead/Rainbow Falls loop makes it a 13.6-miler.

Insider Tips:
-High Top may be the LeConte massif’s ultimate summit, but it doesn’t claim anywhere near the best views. Check out Myrtle Point (the easternmost subpeak, reachable less than a half-mile past High Top via the Boulevard Trail) and Cliff Top (west of the LeConte Lodge) for those. On a clear day at Myrtle Point, for instance, you can gaze from the lowlands of the Tennessee Valley to the highest country in the Southern Appalachians, including the other chief peaks of the Great Smokies (Clingmans Dome, Mount Guyot, etc.) and the high ranges of North Carolina—among them the Black Mountains (including 6,684-foot Mount Mitchell, the tallest peak east of the Mississippi), the Great Balsams, the Great Craggies, and the Roan Highlands. For those spending the night on Mount LeConte, Myrtle Point also offers one of the best sunrise vantages in the park.
-Spring and autumn are the premier seasons for hiking the Bullhead Trail: Springtime brings plentiful blooms in the forests and shrublands along the way—trilliums, fetterbush, Carolina silverbells, etc.—while the fall-foliage vistas are topnotch. Keep in mind that, keeping as it does to a southerly exposure most of the way, the Bullhead can be hot and waterless during the summer months.
-If you’re overnighting at LeConte Lodge, it’s a good idea to make advance reservations. You’ll need a free backcountry pass to bed down at the LeConte Shelter, meanwhile. 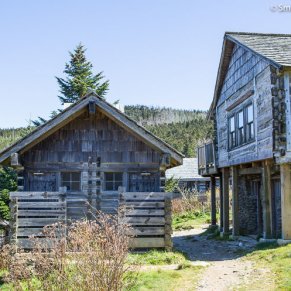