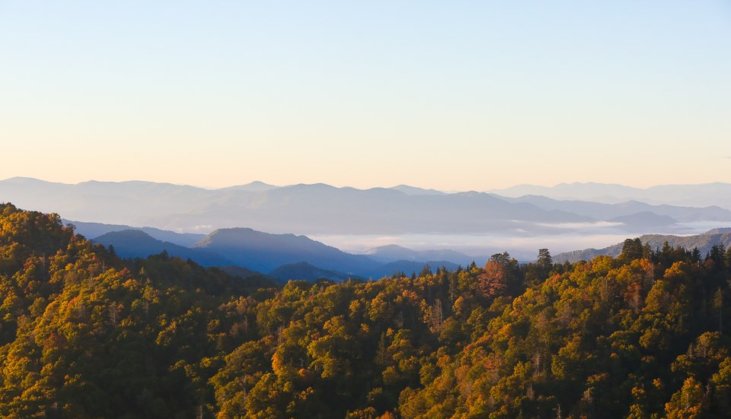 Shutterbugs from all over the world find rich pickings in this Southern Appalachian wonderland, where whopping long-range views are in ample supply and small-scale treasures—a spider’s web glistening with dew in a cove hardwood forest, a moss-coated rock along a streambank—reward those who slow down and zoom in.

We could devote a whole blog series to incredible spots for photography within the most popular national park in America, but today we’re spotlighting eight of the very best! 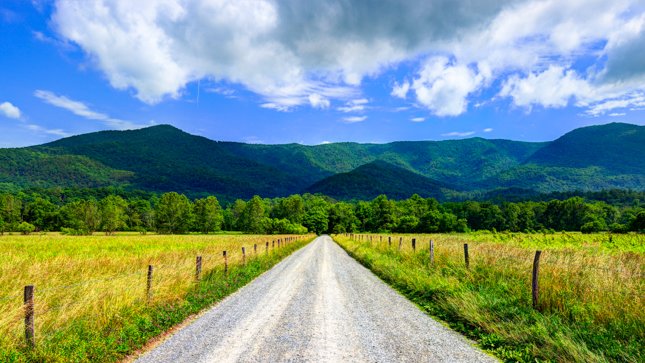 Swaddled by mountains, the gorgeous basin of Cades Cove is a top draw of Great Smoky Mountains National Park for good reason. Photographers here don’t have to work hard to nab wall-calendar-worthy pictures of the Cove’s pastoral loveliness. The abundance of historical buildings dating from the early settlement years of the area add to the appeal. So does the possibility of photographing Smoky Mountain wildlife such as white-tailed deer, wild turkeys, coyotes, and black bears; Cades Cove is easily one of the best places in the park to see such critters. There’s not a bad season for capturing the beauty of Cades Cove through a lens, but we suggest making a special effort to come here during the peak of fall colors. 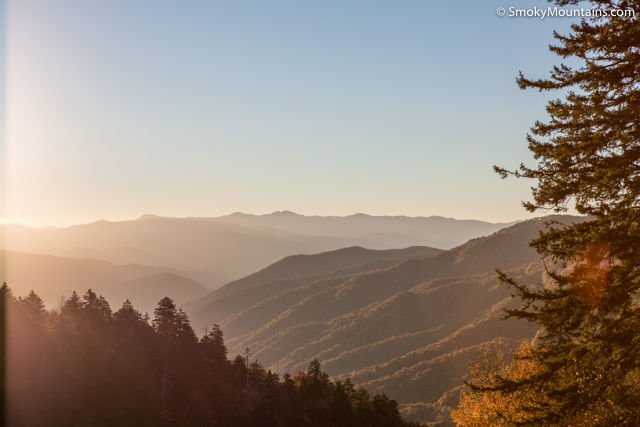 Just about midway along its 33-mile run over the Great Smoky Mountains, US Route 441 crosses the lowest pass in the park that’s accessible by vehicle: Newfound Gap, situated at 5,046 feet. One of the great landmarks in the Great Smokies, Newfound Gap is also rife with photographic opportunities. For one thing, the views are pretty darn impressive, not least at sunrise and (to a somewhat lesser extent) sunset. The border between Tennessee and North Carolina slices right through Newfound Gap; straddling the two states and snapping the state line sign gives you some classic Instagram material. And then there’s the Rockefeller Memorial, another popular spot to frame: This monument marks where President Franklin D. Roosevelt dedicated Great Smoky Mountains National Park on September 2nd, 1940.

A stone’s throw from Newfound Gap, the Morton Overlook along US Route 441 offers one of, if not the most celebrated vantages for viewing (and photographing) a Great Smokies sunset. The westward prospect down the beautiful forested canyon of the Walker Camp Prong to skyline ridges is inspiring any time of day, but when our home star is going down and painting everything crimson and pink, it’s just breathtaking. (Heads up: Sundown’s most perfectly aligned here from late spring through high summer.) 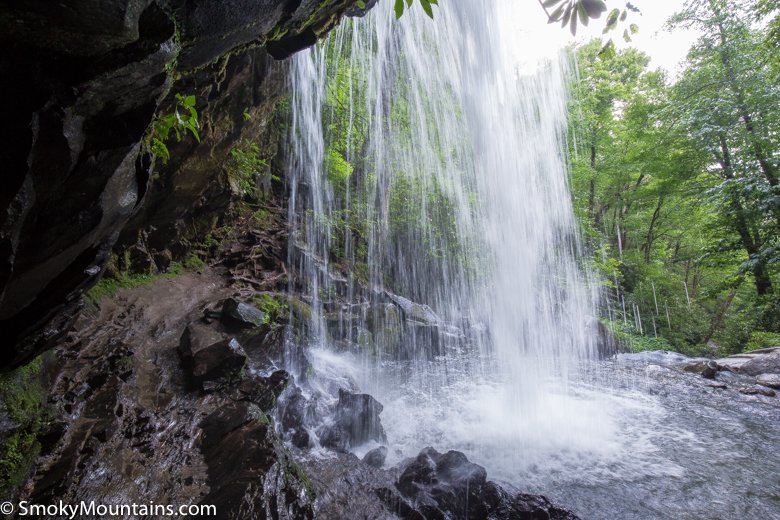 Grotto Falls, where the Roaring Fork off Mount LeConte takes a 25-foot plunge off a ledge into a rock-cupped pool, is one of the highlights of the Roaring Fork Motor Nature Trail near Gatlinburg, reached on a short and easy trail. It’s all-around photogenic, but what makes it especially enticing is the fact that you can walk behind the curtain of falling water without getting wet: an opportunity to capture some special, downright ethereal images. (Bonus photo op: Farther along on the Roaring Fork Motor Nature Trail, the weeping slope known as the Place of a Thousand Drips is another winner, especially after a good rainfall.) 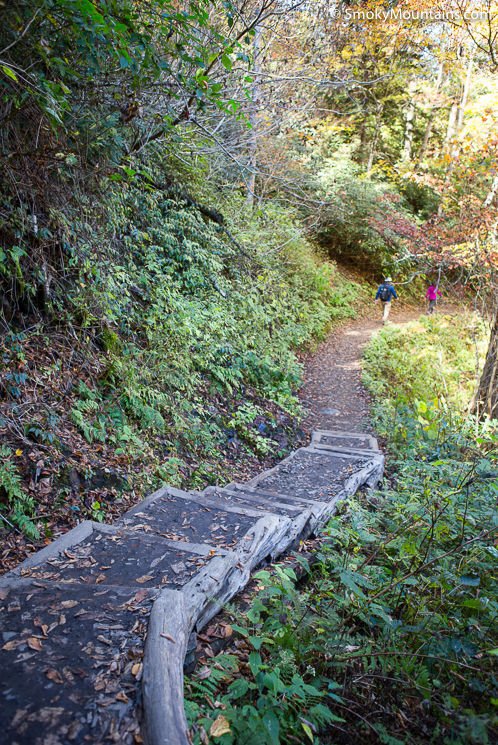 The craggy outcrops of the Anakeesta Formation called the Chimney Tops, which loom over the West Prong Little Pigeon River off Sugarland Mountain, are one of the most impressive geological formations in the Great Smoky Mountains—and an iconic subject for photography, for sure! You’ve got multiple options for capturing their sharp profile: Pull off at the Chimney Tops Overlook along US Route 441 or hike the Chimney Tops Trail for a closeup. 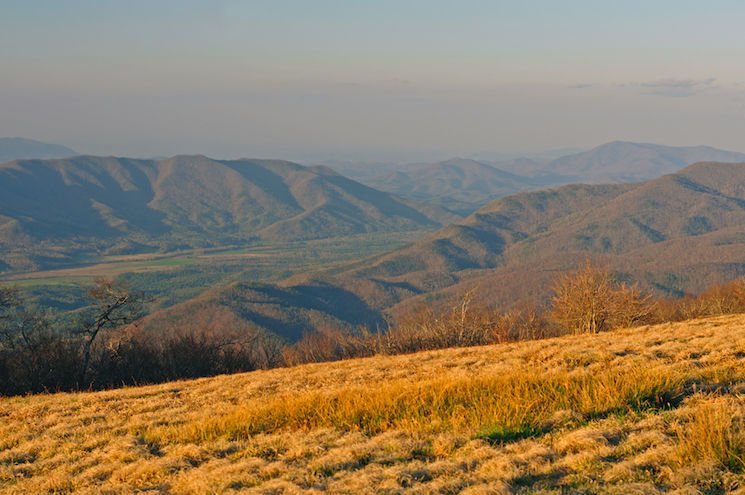 The sprawling mountaintop field of Gregory Bald—one of a couple of the high-elevation balds the Park Service actively maintains in Great Smoky Mountains National Park—is scenic year-round, delivering long views from its wide-open stage nearly 5,000 feet up along the Smokies divide. But in mid- to late June, it becomes an absolute showstopper thanks to the park’s most celebrated display of blooming azaleas. Flame azaleas, smooth azaleas, Cumberland azaleas, and other varieties grow in abundance up here and naturally hybridize, producing a glorious kaleidoscope of vibrant colors with their extravagant flowers. It’s no exaggeration to say that the azalea bloom on Gregory Bald is one of the pinnacles of Great Smoky Mountains scenery, making a definite pilgrimage for photographers willing to make the demanding round-trip hike. 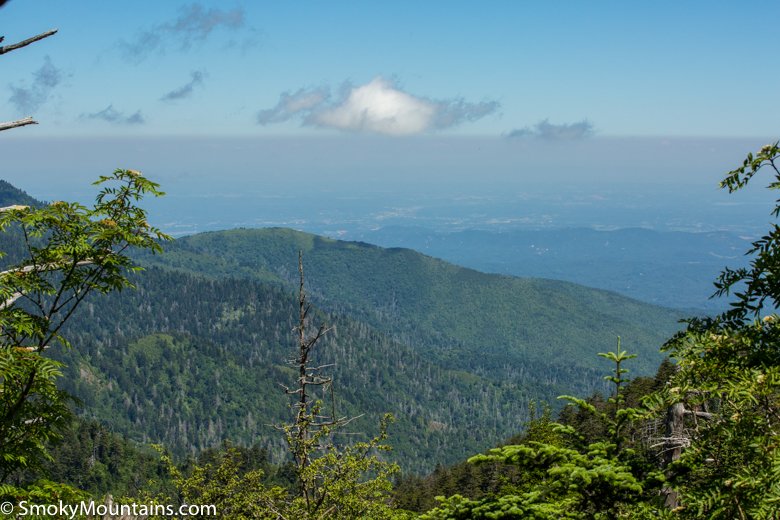 Accessed off the Boulevard Trail tracing its namesake ridge between the Smoky Mountain divide crest and Mount LeConte, the Jumpoff ranks among the great scenic vantages in the national park. (And, in fact, much of the walk here from Newfound Gap Road via the Appalachian Trail provides glorious views.) The Jumpoff outcrop puts a whole lot of beautiful terrain in your viewfinder, including the great loom of 6,621-foot Mount Guyot—the second-highest summit in the Great Smoky Mountains—to the northeast and the imposing Anakeesta crag of Charles Bunion just a short way down the Great Smokies divide. (If you’re up for a bit more hiking, it’s easy to tack on Charles Bunion to your Jumpoff trek; its viewshed is just as impressive, though you’ll likely have that much more company.) 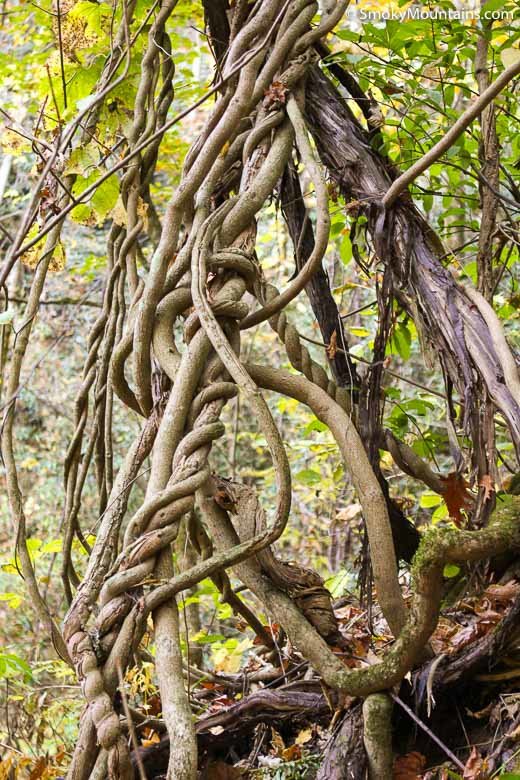 The Kanati Fork Trail makes a hearty climb up from the Oconaluftee River valley along Newfound Gap Road to the Thomas Divide. While the whole trail’s great, the real reason it makes this list is on account of the first couple of slopeside miles, which in springtime put you in the middle of one of the national park’s best-known displays of wildflowers. The blooms tend to peak in April, but there’s plenty of floral loveliness earlier and later in the season as well. Give yourself plenty of time to amble amid the Dutchman’s breeches, trilliums, trout lilies, and other petaled marvels, shooting away to your heart’s content.

The splendor of Great Smoky Mountains National Park manifests in countless subjects for photography all year-round. Needless to say, it’s hard to take a bad picture in this incredible place! 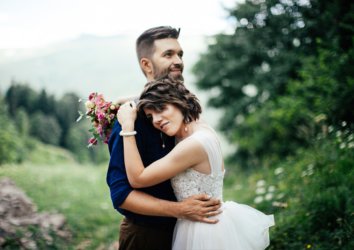 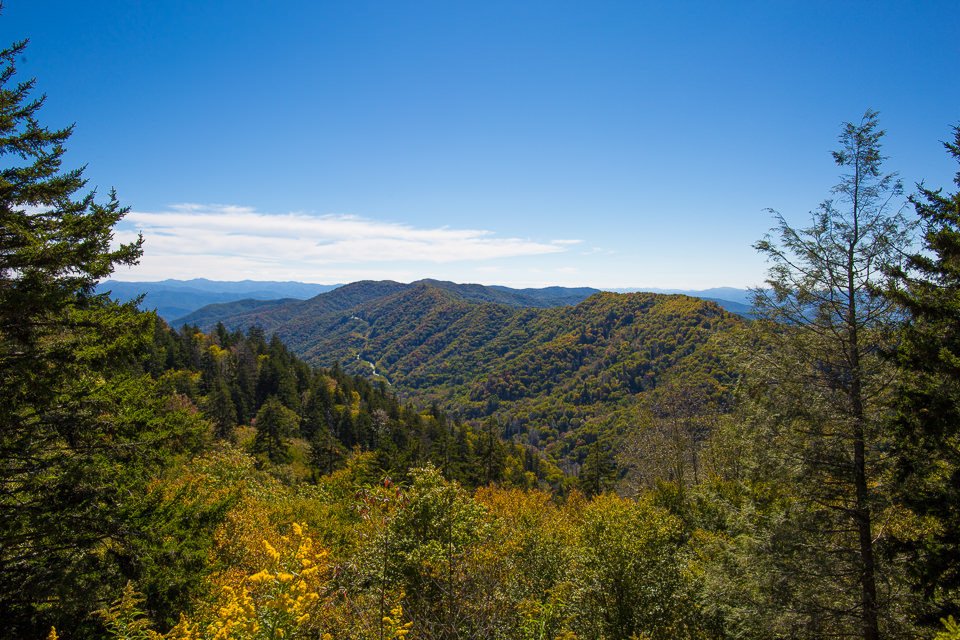 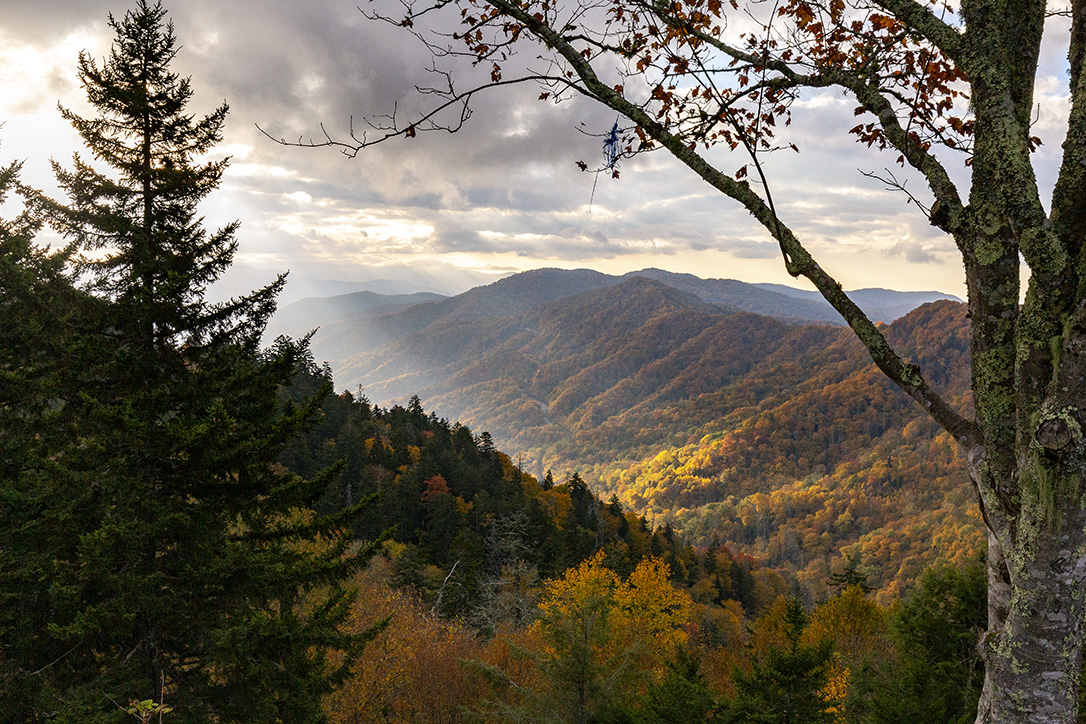 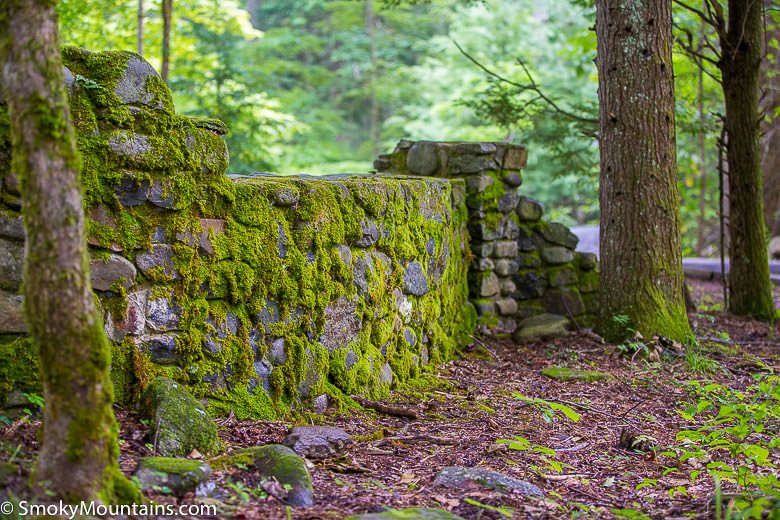 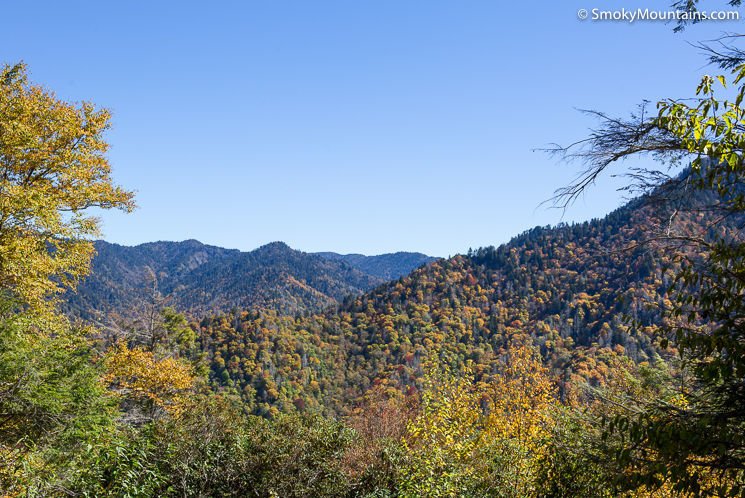 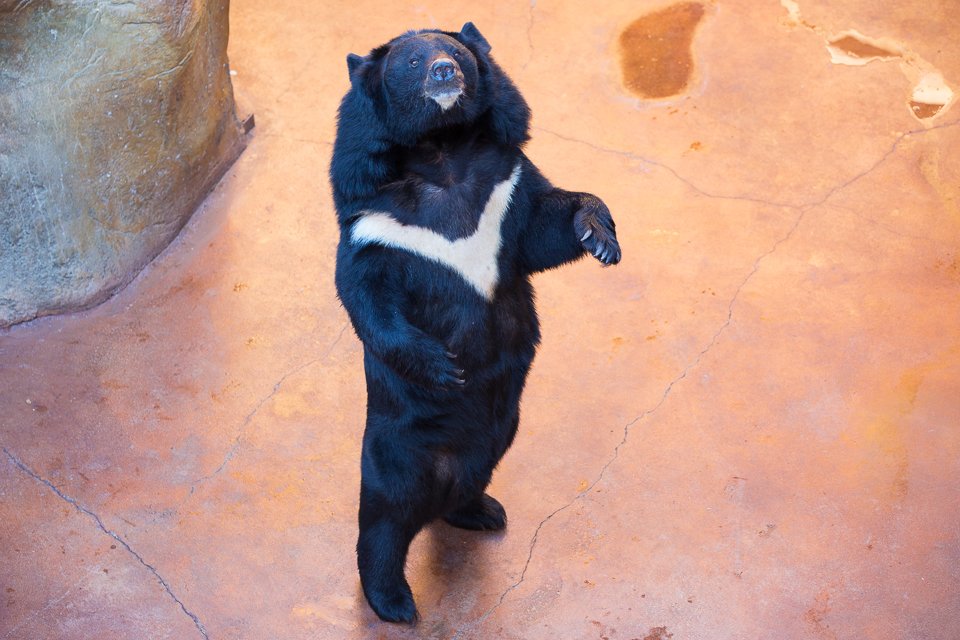 National Park Blog
By Brittany Mendez on November 23rd, 2021
Wildlife in the Smokies: What Lies Within the Mountains?