Usually, a fairly quiet route, the Sugarland Mountain Trail serves up a meditative ridge walk in the heart of the Great Smokies. From gripping mountain views and Southern Appalachian forest diversity to the thrill of those knife-edge ridge stretches, it's really one of the national park’s most satisfying long-day hikes.

The Sugarland Mountain Trail lets you marinate in the deep solitude of the Great Smokies high country. Tracing the spine of the namesake ridge, you’ll pass through numerous forest zones. You’ll also bask in inspiring views of some of the range’s major peaks and watersheds.

This 11.7-mile-long, all-day trail links Fighting Creek Gap in the north with the Appalachian Trail along the main Smoky Mountain divide in the south. It involves some 4,422 feet of elevation.

Among the chief attractions of the Sugarland Mountain Trail is the fact that it treads the full length of one of the Smokies’ great landforms. Sugarland Mountain is an impressively bulky, narrow ridge between the Little River on the west and the West Prong of the Pigeon River on the east. Rising well above 5,000 feet in elevation, it extends from the Smoky Mountain divide generally northwestward to dribble out above the Little River and Fighting Creek confluence.

From the Fork Ridge Trailhead off Clingmans Dome Road, you’ll take a little spur path on the other side to the Appalachian Trail. Follow this southwest (left) a short way to its junction with the Sugarland Mountain Trail.

Working your way toward the junction with the Rough Creek Trail, you’ll skirt ridgeline knobs, trace narrow bottlenecks (less than 10 feet across in places), and drop into little saddles. This is the basic topographic rhythm of much of the Sugarland Mountain Trail. Watch for views out to Mount Le Conte over the West Prong of the Pigeon River to the east and vistas over the Little River drainage to the west. Some 3.5 miles in, look for the distinctive slate pinnacles of the Chimney Tops, studding a northeasterly spur of Sugarland Mountain.

Past the Rough Creek Trail junction (about 4.8 miles from the Appalachian Trail), the Sugarland Mountain Trail proceeds through dry ridgeline woods and thickets and around lusher coves. Outcrops offer nice vistas west over the Little River to Miry and Bent Arm ridges and Blanket Mountain. In the shady headwater basin of the Big Medicine Branch, you’ll pass the site of a former backcountry campsite.

You’ll ease down through pinewoods, broadleaf stands, and shrublands to Huskey Gap, some nine miles from the start of the trail. After climbing a broad height, you’ll drop down to Mids Gap and ascend a foothill spur. Then you’ll make a steep descent to Fighting Creek Gap and the northern terminus of the Sugarland Mountain Trail. Then you can pat yourself on the back!

Insider Tips:
-Spring wildflowers abound along Sugarland Mountain Trail. Given the variety of forest types—cove hardwoods, pine-oak woods, conifer groves—and the broad elevation range, you’ll likely catch good blooms at least somewhere along the way between April and midsummer.
-Keep an eye peeled for black bears along the trail. Even if you don’t see the shaggy beasts, you may come across their heaping scat along the ridgeway. 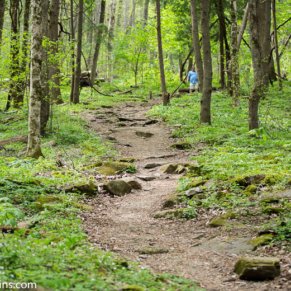