The Gatlinburg Chateau is located just a little over a block from the main street of Gatlinburg. We have free wireless internet. There is an outdoor seasonal pool and hot tub for your enjoyment and relaxation after a day of visiting the area. Our location is convenient walking distance to Ripley's Aquarium of the Smokies. This unit is a two bedroom with a queen bed in each bedroom. It also has a queen size sofa bed in the living room. The kitchenette consists of a full size refrigerator, microwave, Coffee Maker, and a 2 burner range stove.

If guest cancels 7 days prior to the arrival date, the only penalty is a non-refundable reservation fee of $11.28. Once within the 7 days, the guest is responsible for the first nights rent + reservation fee + tax.

The property was decent, and it appeared some rooms were nice, but unit 408 was like walking into a condo that hadn’t been upgraded since 1980. The furniture was old and smelly, light switches didn’t work, and we didn’t get extra pillows or cases for the pull out bed (which was like lying on springs with no cushion. We left early to stay at another resort. The answering service was very reliable and helpful.

Would recommend to others? No
Seattle, NOTAVAIL

Frequent traveler to Gatlinburg, property unit in need of repair

We were there just a few nights. The only positive was that It was a good location, being a short distance from downtown Gatlinburg. The unit itself had many issues that should be addressed. The bathroom had water stained ceiling tiles, holes in the wall where towel holders was partially repaired, there was water in the bottom of dishwasher so we did not use it, the air conditioner leaked orange on the patio, the railings were unsafe for my 2 year old granddaughter as her head could fit through railing. Parking was also an issue as we had to park down the hill and walk up a steep incline. There were no sheets available for sleep sofa which badly needed replaced to the point of being unusable. The building itself was clean and acceptable. Pool was not used, but looked nice.

Would recommend to others? No
Sonya W.
Na, NOTAVAIL

Resort met out needs however it does need updating ( wobbly toilet, leaky air conditioner, sleeper sofa bed broke down, spring broken and in usable for sleeping). Given 6 towels for 5 people staying 3 nights posed a challenge. Furnished kitchen was nice and helped keep food costs down. Nice enclosed pool and hot tub area. We enjoyed the hot tub in spite of the fact that theists were not operational. Staff was pleasant and responsive when we asked for an additional parking pass for a late arrival. Location was walking distance to many thing as well as nears trolly stop to get to things further away. Evenings were quiet and mornings pleasant on the patio or rocking chairs.

Would recommend to others? Yes
Amy H.
Clarksville, TN

Worst Place I Have Ever Stayed!

I am not a picky person at all but this was literally the worst place I have ever stayed. To begin with, all my emails were sent to the wrong email address. Thankfully, my phone number was on the emails and this person contacted me. I called to inform the managers of the mistake but they still did not correct it. When we finally got to our condo we found out quickly that the air wasn’t working properly. I had to go to Walmart and buy a fan. The temp in our condo stayed in the high 80’s and low 90’s every day. My makeup literally melted in the bag. We called and they did send up maintenance and they could not believe how hot it was in there. There was nothing they could do in a short amount of time so we were given a box fan!! A BOX FAN!! All the furniture was nasty and falling apart in this place! Christmas decorations setting out! Dust EVERYWHERE! The description says it has 2 queen beds and they were full-size. So, me, my husband and my granddaughter all had to squeeze in a full-size bed. On our second day there, the elevator broke. WE WERE ON THE 4th FLOOR! It was still not fixed by the time we left. We actually left our vacation and came home a day early because that place was so miserable!! I would NOT recommend this place to ANYONE!!

Would recommend to others? No
Karen R.
Any City, NOTAVAIL

Condo #408 needs a lot of work! Could not turn on 3 lamps in living area, TV in bedroom never could change channels. Could not slide the shower doors, no towel rod in one bathroom and a hole where the other was but loosely installed above. Wasp nest in artificial plant on balcony, husband got stung. Furniture, bedspreads, pictures very outdated unless you are back in the 80's. Christmas decorations could be removed for the summer too! Staff was nice when called about needing a top sheet and pillows. I have no idea what the other condos are like but this was very disappointing. On a positive the kids enjoyed the pool.

Would recommend to others? No
April D.
Campbellsville, KY

The location was great, a short 5 minute walk & you’re downtown. It could have used a few upgrades here & there but overall, I was pleased. I loved having a balcony too. Everything worked & I would definitely stay here again. I had to call the property manager after hours & he was so nice & helpful. They have multiple properties & I was in the wrong location when I got there. They do send email instructions with your code to get in the room & what code to use when you check out. I just missed the actual address of the condo I was staying in lol

Would recommend to others? Yes
You won’t be charged yet.
Nearby Cabins 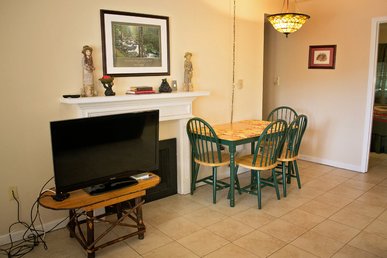 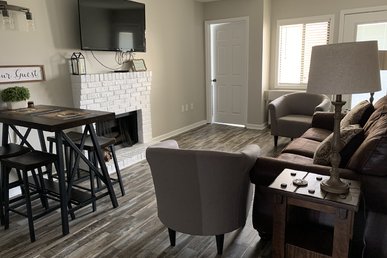 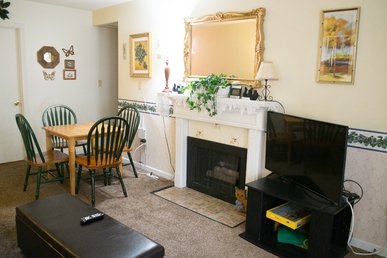