When traveling with a large group, you could reserve a block of rooms at a hotel. But it’s much more fun, convenient, and affordable to rent your own private lodge instead. Big Sky Lodge II, for instance, can sleep twenty-eight people and offers loads of amenities you won’t find in your typical hotel.

Take the two game rooms—yes, Big Sky Lodge II has two game rooms. The one on the top floor is home to Golden Tee and Ms. Pac-Man/Galaga arcade games and a Wheel of Fortune pinball machine, as well as a flat-screen TV (one of ten in the lodge) and a large wet bar. The downstairs game room features a pool table, air hockey, and a pub table for playing rummy or Uno. Also downstairs is a home theater with a large projection screen and cinema-style seating for twelve.

A huge great room makes up most of the lodge’s main floor. Sumptuous leather seating, a stone-surround fireplace, and a flat-screen TV make the living area an inviting place to unwind. With three long tables and a breakfast bar, the dining area can seat your entire group at once—you don’t have to eat in shifts when you stay at Big Sky Lodge II. Nor do you have to cook in shifts. The large, open kitchen has two full-size refrigerator/freezers, two ovens, loads of other appliances, cookware, and tableware, generous counter space, and more than enough room for several people to cook at once.

The lodge’s seven bedrooms and six and a half bathrooms are spread out among the three floors. The top floor has three primary suites, each with a king-size bed, a TV, a towering sloped ceiling, and a private bathroom. One of these bedrooms has a queen-size sleeper sofa as well, making it a great choice for parents with little ones in your group. Two of the upstairs bedrooms open onto a balcony, so you can slip outside to watch the sunrise without waking any of the others.

The main floor’s bedroom also has a king-size bed, a TV, and a private bathroom—and this bathroom has its own jetted tub for an extra bit of pampering. The three remaining bedrooms, which are downstairs, share two full bathrooms, with a powder room for added convenience. Two of these bedrooms feature a set of queen-size bunk beds; the third bedroom has a pair of queen-size bunk beds so that it can sleep eight people in all. These bedrooms, like the others, have their own TVs. And if you have a few more guests, each of the game rooms has a twin-size pullout bed.

If you think the inside of Big Sky Lodge II is fantastic, wait till you check out its outdoor spaces. The lodge has multiple decks and balconies furnished with plenty of rockers so that everyone can kick back and take a deep breath of fresh mountain air while gazing out over the old-growth trees. One of the decks has a hot tub as well. There’s no better way to admire the star-studded sky than while luxuriating among steamy bubbles after a day on the go.

Big Sky Lodge II also boasts a large private gazebo. The gazebo’s roof and ceiling fan will keep you cool on even balmy summer days, and its picnic table is an especially inviting spot for enjoying a meal or a snack. Just outside the gazebo is a park-style charcoal grill, so you can cook as well as dine alfresco.

Because Big Sky Lodge II has so many luxuries and amenities, you could have a great time without leaving the property. But then you’d be missing out on all the local attractions less than ten minutes away: the Great Smoky Mountains National Park, the Gatlinburg Arts & Crafts Loop, Ober Gatlinburg Ski Area and Amusement Park, the Guinness World Records Museum, Ripley’s Aquarium of the Smokies, mini golf, thrill rides…

People say you can’t have it all. Obviously, those people never stayed at Big Sky Lodge II! Make your reservation today, and get ready for your best group getaway yet.

your online pics make the place look bigger than it really is. It might sleep a lot of people but no room for sitting

Would recommend to others? No
Kent F.
Hendersonville, TN

The say was good. The property needs work, floors were damaged and other areas need work. Need to provide more sheets and blankets (our blanket had a hole in it. Most complaints came from the lack of internet access for all of the WIFI users. We really liked the area and can see us visiting again but maybe a different property.

Would recommend to others? No
Neva-eme A.
Riverdale, GA

Verified Guest
Would recommend to others? No
Brock M.
Elkridge, MD

OK in a pinch, but would not recommend.

This rental is beyond its prime. It was big, and it technically fit the bill for our needs (family vacation with 24 people), however I would not rent again. There were almost too many service issue to list: bad/inconsistent light switches that cracked and hissed when used, and sometimes didn\'t work at all, ripped carpet on the stairs with nails sticking out, broken hot tub (cold tub), a non-operational dishwasher, and broken box springs in some of the bedrooms. Our bedroom box spring had been \"repaired\" with 10 screws, and broken again with wood sticking out into our back as we lay down. Additionally, the carpet in the bedrooms looked gross, and I didn\'t want to touch it with bare feet. The kitchen had wear and tear, but what takes actually staying there to notice is how small it is to walk around and try to cook in. The space between the counters and island, fridge, oven, and stove is too small. Although in pictures, it appears large, in practice it is cumbersome and awkward for even two people to try to prepare a meal. Since we had 24 people staying in the house, it was unmanageable. If someone stands at any of the appliances, no one else can get through to access any other part of the kitchen. The main sink (a shallow triple sink) was ridiculously restricted by the wrong faucet which couldn\'t reach to wash dishes in the two outer bowls. The secondary sink which seems practical to have in a large kitchen, was not accessible when someone was using the main sink, as two people could not fit in the narrow passageway between the island (where the secondary sink was located) and the main sink. The kids never noticed any of the issues and loved the arcade and movie theater. The house is in beautiful surroundings, and it was nice and peaceful to sit on the back porches. However, I had imagined leaving the house for quiet walks in the woods, and this wasn\'t possible. The house is located on a large parking lot that leads to all of the other matching houses, and the parking lot leads out to a steep, twisty road which would not be safe for pedestrians. So that was disappointing. My favorite story of the trip was when a service rep from the rental company arrived the second day to address the broken dishwasher and hot tub. He assured us that a new dishwasher was going to be installed the next day, and that they would be \"flying someone in\" to take care of the hot tub. While impressive and seemingly responsive, when we called two days later to report that neither had happened, we learned that both service tickets were closed and assigned as fixed.

Would recommend to others? No
You won’t be charged yet.
Nearby Cabins 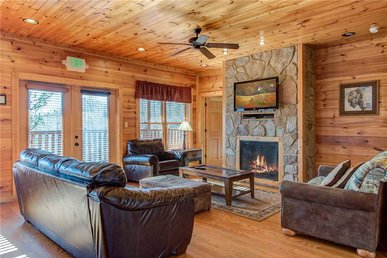 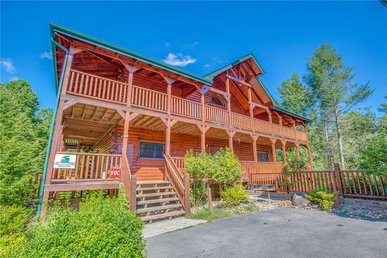 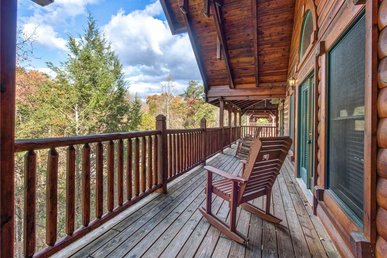 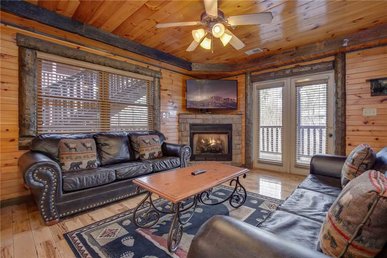