The short, easy Cascades Trail makes a loop along the Blue Ridge Parkway only about 15 miles from Boone, NC. Its centerpiece is Cascade Falls (“The Cascades”), a 100-plus-foot drop of Fall Creek down the Blue Ridge escarpment. While that waterfall is the main attraction, the trail’s also worth taking for its interpretive signs focused on area ecology.

A hop, skip, and a jump from Boone, North Carolina, the Cascades Trail delivers impressive scenery for only a modest expenditure of time and effort. It’s one of the many precious gems strung along the great Blue Ridge Parkway running between Shenandoah and Great Smoky Mountains national parks.

In combination with the Mountains-to-Sea Trail, the route forms an easy, roughly mile-long loop shadowing the Parkway. There’s not much in the way of difficulty, although bear in mind there are stairs involved on this hike. Give yourself a half-hour at least to enjoy the ramble, which starts from the Cascade Falls overlook parking area in E.B. Jeffress Park. This lies only about 15 miles east of Boone.

The “Cascades” is an alternate name for Cascade Falls, an extended plunge of Fall Creek down the Blue Ridge escarpment. This escarpment marks the eastern front of the Blue Ridge province of the Appalachians where it overlooks the Piedmont lowlands to the east. Fall Creek is a tributary of the Yadkin River, which flows to the Pee Dee. Cascade Falls does indeed take the form of a collection of slanting cascades. Their cumulative drop adds up to somewhere north of 100 feet.

You’ll find a seasonal (May-October) restroom at the parking lot as well as some picnic tables: handy for a pre-or post-hike lunch!

The initially paved trail quickly turns into gravel. At the loop’s fork, take a right. (You can obviously go either way, but most opt for a counter-clockwise hike.) This edges along the rim through the mixed-hardwood forest, with particularly expansive views downslope in wintertime.

The loop includes more than a dozen interpretive plaques, making this essentially a self-guided nature trail. You’ll see signs identifying various trees and shrubs, from mountain laurel and flame azalea to pignut hickory and tulip-tree. (The latter is an especially impressive member of the Southern Appalachian ecosystem. It’s one of the biggest hardwood trees in North America, growing to nearly 200 feet tall and massive girth in old-growth specimens.) The hardwood forests of the Southern Appalachians are world-famous for their diversity, and it’s wonderful to get to know some of their defining species on this loop.

The path drops down to a footbridge across Fall Creek. Then, at a T-junction, hang a right to follow the creek downstream to the falls. There’s an upper and lower overlook, the viewpoints protected by fencing and stone walls. Exercise caution at these fine vantages, as people have been injured and even killed falling here.

Returning to the junction, you’ll return to the parking area via the Mountains-to-Sea Trail, which will take you back to the first loop split.

The loop hike to the Cascades through shady forest and rhododendron/laurel thickets makes a very pleasant jaunt along the Blue Ridge Parkway, and a super-convenient mini-adventure out of Boone!

Insider Tip:
If you have a little extra time, take the trail from the same parking lot toward the nearby Tomkins Knob Overlook. This route provides access to some fascinating historical structures: the 19th-century Jesse Brown Cabin, an old springhouse, and a Baptist church. 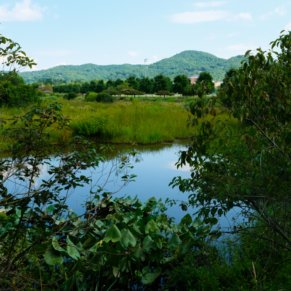