Rainbow Falls and the trails leading up are nothing short of spectacular. The moderately difficult 3-4 mile trek features four different falls of varying sizes. It also leads you past some of the most stunning scenery east of the Mississippi.

Approximately 55 miles from downtown Asheville, nestled near Gorges State Park, is a spectacular hike up to the towering 150-foot Rainbow Falls. Cascading down from a near-vertical cliff, Rainbow Falls looks like it was created expressly for photographers. So perfect is the backdrop that shutterbugs would be hard-pressed to take a bad picture.

You don’t have to be a photographer to enjoy Rainbow Falls, though. The trip up is worth the effort, if only to stop and listen to the water cascade down and crash into ancient boulders below. Rainbow Falls is the big payoff, but there’s so much more along the way. Here’s what you can expect from the trailhead up:

Early on, the trail is graveled and the going easy. You may feel a sense of accomplishment as you realize how gentle the ascent is, but don’t get too comfortable. The trail quickly grows more challenging. Take the time to absorb the dramatic roar of water as it cascades from Horsepasture River into the valley below.

As you near the sound of the river you will notice that your ascent has suddenly become a descent. Watch your footing as you continue down the old roadbed. The graveled trail will lead you into a small cove where the crashing sound of water will all but disappear. The trail becomes even steeper and then crosses a small stream. It is at that point that you cross from Gorges State Park onto property owned by the National Forest.

The moment you step into the National Forest you will notice that the trail is no longer graveled and far less groomed. That’s not a bad thing, though. In fact, it adds a bit of challenge to the path down to another, larger creek. As you near the creek you will notice a series of somewhat narrow paths to your left. While they’re not part of the official trail, they are worth exploring when you have time. Expect to get wet as you work your way across the creek.

Once you’ve crossed the creek you will wind back up the trail toward a large campsite. Just beyond the campsite the trail gets steeper and rougher. The trade-off is that you’re now hiking next to the river, complete with the sights and sounds it’s famous for.

As though preparing you for the main show, there are several smaller cascades along this stretch. You’ll climb for approximately 0.5 mile and realize that something big is about to reveal itself. You’ll make a tight curve to the right and see an open area thick with mist from the raging waterfall. There’s a fence along the trail that allows you to get your first view of the stunning waterfall.

The trail will lead you directly through the mist and back into the thick forest. Take a beat before you go back into the forest, though. Just before you get there you’ll see another path, this one veering off to the left. This smaller path runs near the base of the fall and offers another fantastic view.

You’ll notice other, less stable paths leading to the rocks directly in front of the falls. It’s tempting to claim them as your own viewing area, but do so with supreme caution. The constant mist is beautiful but it creates treacherous muddy conditions with rocks covered in slime. You’ll also get as wet as you might on an amusement park water ride by standing that close to the waterfall.

At this point you can either make your way back down the mountain to your car or continue another 0.5 mile (one-way) upstream to see two smaller waterfalls – Turtleback Falls and Drift Falls. When you’re ready to head back, simply follow the same path down to the parking lot. 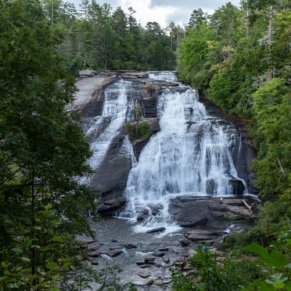