Yes, you can order Urban Orchard Cider Co. craft cider at many restaurants and bars in western North Carolina, but it's more fun to go straight to the source. With a tasting room on the South Slope in downtown and another in West Asheville, you can have your pick of many hard ciders along with bites of food sourced from local producers.

There’s no doubt Asheville’s beer game is strong, but the craft cider scene in this mountain hotspot is on point, too. One of the best places to sample local ciders is the Urban Orchard Cider Co.

Established in 2013, the cidery’s popularity has exploded, thanks in part to its creative flavor combinations and the fact that some ciders are gluten free, thus giving people with dietary restrictions a crisp, refreshing beverage to enjoy.

Urban Orchard Cider Co. produces more than 50 types of hard cider, each made with apples grown just south of Asheville in Hendersonville, N.C. Each cider ferments for at least eight months using a variety of yeasts to create different flavors profiles. Urban Orchard’s “self-racking” process allows sediment to settle to the bottom so the ciders aren’t filtered.

Contrary to what you may think, Urban Orchard’s ciders aren’t sweet like the cider you’re accustomed to drinking during the holiday season. Sure, some are on the sweeter side, but that’s because they’re supposed to be. Urban Orchard produces ciders with varying degrees of “dryness,” often using extremely unique flavor combinations. For instance, the dry “Hopaleño” is infused with jalapenos and grapefruit.

Urban Orchard has two locations in Asheville. The original tasting room is on Haywood Avenue in West Asheville. It’s a more intimate location with fewer selections on the cider menu, but it does offer comfy hammocks in the back yard.

The South Slope location on Buxton Avenue near downtown is situated prominently among Asheville’s notable craft breweries. All of Urban Orchard’s production takes place in the 20,000-square-foot building that fills up nearly the entire block. A 4,000-square-foot tasting room features a massive bar, plenty of comfortable indoor and outdoor seating and a hip, relaxed vibe. The building was originally home to a Hav-A-Tampa cigar factory, and Urban Orchard played homage to that history with a huge Cuba-inspired mural painted on the side of the building.

Along with 20 ciders, craft beers from neighboring breweries and nitro-brewed coffee, the South Slope location offers a small food menu. Charcuterie plates, dips, salads and a few sandwiches, including gluten-free options, are among the offerings.

With so many flavors to choose from, we recommend ordering a flight of four, six, nine. We think you’ll be glad you went this route.

Ginger Campaign
One of Urban Orchard’s flagship ciders, the semi-dry cider prominently features flavors of ginger and crisp apple. The incorporation of ginger makes this a crisp, refreshing drink that’s perfect for any time of year.

Sidra Del Diablo
A semi-sweet cider that expertly pairs two very different flavors: fresh habanero and vanilla. It shouldn’t work, but somehow it does. If you order this in a flight, drink it last. Trust us on this one.

Bananahemian Rhapsody
We’ll admit we ordered this one just because we liked the name, but the play on a bananas foster dessert was a welcomed surprise. The cider is aged in oak barrels from a rum distillery before being infused with flambeed bananas. The best part is proceeds from this cider go to support a local music school. 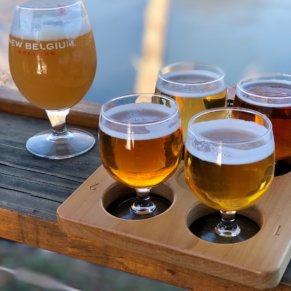 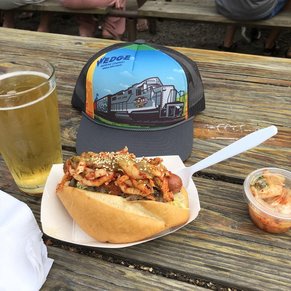 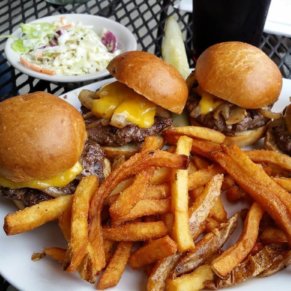