With over 50 craft beer, wines, and ciders on draft, Pour Taproom has plentiful options. The unusual self-serve, pay-by-the ounce approach to the brewery scene is refreshingly different and fun. This fresh new concept and the freedom to try numerous craft beers, makes Pour Taproom a hop haven worth checking out!

We are living in the golden age of craft beer in America. The downside of this new era is that it can sometimes be hard to choose a beer when you have so many options you want to try, and you may be reluctant to commit to an entire glass of something you’re not sure you’ll like. You won’t have that problem at Pour Taproom in Asheville, where you pay for your pours by the ounce instead of the glass, meaning you’re free to try as many or as few varieties of beer as you like.

With well over 50 rotating taps, Pour Taproom definitely gives you plenty of options to choose from! You also get to pour the beer from the taps yourself, so you can truly customize your beer drinking experience exactly how you want it. Want to create a progressive flight that moves from easy-drinking lagers to robust porters? Want to sample all of the different IPAs on tap? Prefer to just settle down with a full pint of a hard cider? The beer world is truly your oyster at Pour Taproom.

Variety is one of the great benefits of Pour Taproom, and their roster of beers contains some options that you’re likely familiar with, as well as many that may be new to you. Although the offerings change depending upon availability, here are a few of the beers you can expect to find when you visit Pour Taproom:

Bell’s Oberon Ale
This wheat ale has a nice balance between hop flavor and fruitiness, and it is perfect for summer sipping.

Delirium Tremens
This classic Belgian ale is a monster at 8.5% ABV, which is what makes it perfect for a venue where you can decide how much to pour.

Big Boss Brewing Company Saints and Sinners
This ale from a North Carolina brewery featuring some of the oldest stone mills in the country is aged in oak barrels for six months.

The atmosphere at Pour Taproom in Asheville is casual and laid back, and attracts everyone from serious craft beer enthusiasts to people who just want to enjoy a nice drink in a fun setting. The decor is clean and modern without being stuffy, and there are some games to play such as billiards and shuffleboard. Pour Taproom also has a dog-friendly porch for you and your four-legged friend to enjoy when the Asheville weather is at its finest.

Pour Taproom does serve some light food, but their menu generally focuses snacks and other small plates. If you’re looking for a full meal you’ll probably have to head elsewhere. Thankfully, Pour Taproom is located in the historic Biltmore Village close to numerous dining options, so it’s a great spot to grab a pre- or post-dinner beer in the area.

The tap wall is well-organized with visible sections denoting the different types of beers, allowing you to easily locate a particular style or region and go from there. They also feature a few wines on tap for the non-beer drinkers in your group, but people who don’t like beer will find their options somewhat limited as there is no hard alcohol served.

There’s no shortage of beer bars to be found in Asheville, but Pour Taproom deserves a place on any beer aficionado’s must-visit list because of its variety, innovative concept, and sound execution. Whether you’re a dedicated beer aficionado or you’re just getting into the world of malt and hops, you’ll certainly find several beers worth sampling at Pour Taproom.

Insider Tip:
Don’t let your beer adventure end when you leave! Pour Taproom will fill growlers with beer to take home, so you can pour yourself a small sample of several styles and then decide what you want more of. 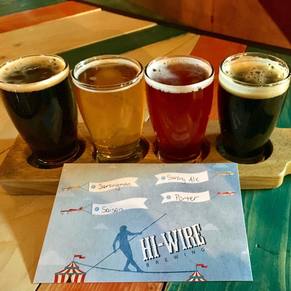